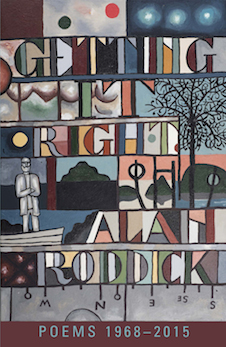 After establishing a poetic presence on the literary scene in the early 1960s, Dunedin’s Alan Roddick published his first collection, The Eye Corrects: Poems 1955–1965, in 1967. A mere 49 years later comes the sequel, Getting it Right.

a great admirer of the economy and the quiet, sharp wit of [Roddick’s] writing ... Alan Roddick is a ‘cool’ poet, a temperament that seems reserved, controlled, decent, funny and intelligent; a craftsman not a showman, with a fine musical ear, whose work is dependable and of the highest order. And as well as witty and clever work, there are poems that catch moments of deep feeling; and equally of exhilaration, such as the ten-year-old Alan standing up on the seat, his head through the sunroof of his father’s car that is cruising downhill, ‘pushing 40’ with the engine off to save petrol, ‘drunk with the scent of heather and whin / that airy silence ...’

Alan Roddick is writing as well as any New Zealand poet currently at work on the scene. It is wonderful to have him back – something to celebrate!

ALAN RODDICK published his last book of poetry, The Eye Corrects: Poems 1955–1965 (Blackwood & Janet Paul) in 1967. He has also written a monograph on Allen Curnow, and, as the literary executor for Charles Brasch, compiled and edited three volumes of Brasch’s verse, the latest being Charles Brasch: Selected Poems (OUP, 2015).