Only Two for Everest

How a first ascent by Riddiford and Cotter shaped climbing history 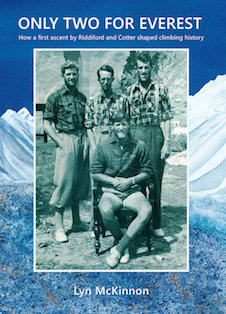 The First New Zealand Himalayan Expedition, in 1951, was initiated by Earle Riddiford, who with Ed Cotter and Pasang Dawa Lama made the first ascent of Mukut Parbat, their target peak in the Garhwal Himalaya. Accompanying them on that expedition, though not to that summit, were two other New Zealand climbers, Edmund Hillary and George Lowe.

Hearing of the success on Mukut Parbat, the New Zealand Alpine Club suggested to the Alpine Club in London that acclimatised New Zealanders would be a valuable asset on the forthcoming 1951 British Reconnaissance of Mt Everest, to be led by Eric Shipton. This resulted in an invitation for two New Zealanders to join the party: thrilling news the four climbers received while they were ensconced in the hill-country village of Ranikhet. A day and a half of bitter dispute rent the party asunder. Which two should go to Everest?

In this enthralling narrative, journalist Lyn McKinnon tells the stories of Earle Riddiford and Ed Cotter, two extraordinary New Zealanders whose climbing achievements were forever eclipsed by the exploits of others. She draws on private papers as well as published work, and extensively interviews Cotter himself, and the families of both men, as well as many other contemporary climbers, to set the record straight.

During a dual career in education and journalism, LYN McKINNON taught English and communications at secondary and tertiary level. She was awarded a Woolf Fisher fellowship for teaching, has worked for a number of publications and also run a bookshop. After retiring from teaching, she wrote a Centennial history of Amuri Area School, then served as an editor for the New Zealand Rural Press and contributing editor for The Deer Farmer, receiving several national journalism awards in the process. After retiring (again) she worked as a freelancer. Following her husband’s death in the Nurse Maude Hospice, Christchurch, she retired (for the last time!) and became a volunteer writer with the Nurse Maude Biography Service.