Being a true history of the expedition that discovered the Snark and the Jabberwock ... and its tragic aftermath 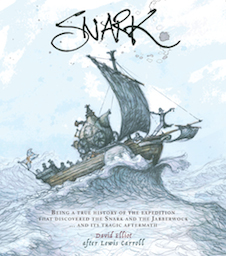 Winner of the 2017 New Zealand Book Awards for Children and Young Adults Margaret Mahy Book of the Year.

Gabriel Clutch was a thief and a liar but he was right about one thing. He told me he had a great secret in his collection that would shake the literary world to its roots if it ever got out ...

So begins the delightfully dark Snark, a tumultuous romp through worlds created by Lewis Carroll and here brought to life through the vivid imaginings and fabulous art of award-winning author and illustrator David Elliot.

What exactly did happen to the Snark expedition? Did his dagger-proof coat protect the Beaver from the Butcher? What befell the Boots in the Tulgey Wood? Who fell foul of the Jabberwock? The Bandersnatch? The Jub-Jub Bird? And, finally, the big question: what precisely is a SNARK ...?

David Elliot’s hero, the Boots, here reveals the whole truth for the first time, from his recruitment to the Snark expedition, to his return from a journey of unimaginable, death-defying adventure ...

In this charming book for grown-up children of all ages, David Elliot is at his spellbinding and artistic best.

DAVID ELLIOT is an author and illustrator of children’s books, based in Port Chalmers, Dunedin. He has won many awards for his work, including New Zealand Post Children’s Book of the Year in 2011 (with Margaret Mahy) for The Moon & Farmer McPhee. Pigtails the Pirate won Best Picture Book in the 2003 awards. As well as writing and illustrating his own books, David has illustrated numerous books by others, including New Zealand authors Joy Cowley, Jack Lasenby and Margaret Mahy;
UK writer Brian Jacques (the Redwall series), and US writers T.A. Barron (Great Tree of Avalon series) and John Flanagan (Ranger’s Apprentice and The Brotherband Chronicles). Henry’s Map was selected by the prestigious School Library Journal in the US for its Best Books list in 2013. In 2011 David received the inaugural Mallinson Rendel Illustrators Award, and in 2014 the Storylines Margaret Mahy Award.

“Rich imagery, with compelling storytelling. It draws readers into the tale of Lewis Carroll’s poetry like never before ..."
Judges of the 2017 Margaret Mahy Book of the Year Award in the prestigious New Zealand Book Awards for Children and Young Adults.

“ … beautifully designed and splendidly illustrated … The result is an irresistible invitation to imagination that will delight readers of all ages.”
Reviewed by Michael Cart for Booklist, Publication of the American Library Association, STARRED REVIEW, 15 March 2017

“The illustrations are incredible, and the presentation is just wonderful … a book for the whole family to enjoy.” – Sarah Forster, Best books of 2016: the 20 best books for kids, The Spinoff, 15 December 2016