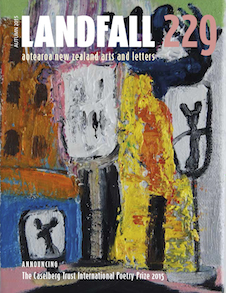 From the creative heart of the nation Landfall 229 presents the best contemporary writing from New Zealand and the Pacific across a breadth of styles and themes, together with a lively array of cultural commentary and two stunning art portfolios.

Playwright Dean Parker provides a remarkable memorial for Anzac Day in the form of a fantasia for voices that features some of New Zealand’s most iconic cultural figures of the twentieth century. Journalist Adam Dudding writes movingly and powerfully about the death of his father Robin Dudding, journalist and editor of the literary journal Islands. Elizabeth Smither offers a wry, small-town ‘love story’ of sorts, set in the 1950s. Tina Makereti provides a brilliant fine-grained essay on personal identity in contemporary Aotearoa New Zealand. David Howard delivers a tour de force of rhyming verse in his panoramic poem ‘The Ghost of James Williamson, 1814–2014’. Clare Orchard contributes a witty diatribe about the culture of denial. And Wystan Curnow turns in a scabrous, rollicking, chuckling-up-his-sleeve satire on vampires in New Zealand.

The artwork features the tumbling dark and light of Jeena Shin’s Motus paintings, and a brand-new series by Rob McLeod of tiny paintings of colours running riot. Simon Richardson’s black-and-white charcoal drawing of his daughter Mila is another visual highlight.

In addition Landfall 229 publishes the winning entry in the 2015 Caselberg Trust International Poetry Prize, ‘Luthier’ by Sue Wootton, along with the runner-up poem, ‘Four Photographs from a Window’ by Jessica Le Bas.

There’s much more, of course: this new issue proves Landfall a vital promontory in the national cultural landscape.