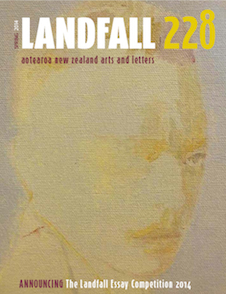 Landfall 228 is an event, an occasion: an arts and literary festival between covers. Offering darting word-play, erudite exploration of culture and literature, and lots of imaginative and critical writing from notable practitioners and new talent, Landfall 228 contains a carousel of exuberant poets, a bureau of unpredictable essayists, a cavalcade of zestful artists, a cluster of fresh and risky prose writers. Also included are the top four essays from the Landfall 2014 Essay Competition, for which 40 entries were received.

The artworks include a photo-essay on a memorial installation made by sculptor Mary McFarlane; a suite of portraits by New York-based New Zealand artist Lorene Taurerewa; graphic art by Denise Copland; and black-and-white graphic art by printmaker Barry Cleavin.

There are short stories or prose fiction from Sheridan Keith, Kate Davis, Russell Haley, Andrew Paul Wood and others, as well as a chapter from a forthcoming novel, ‘The Ice Slide’, by Sandra Arnold, winner of the Landfall Seresin Residency 2014.
There’s a prose childhood memoir by Michele Leggott; a Melbourne memoir by David Herkt; and a poetic tribute to West Coast writer Peter Hooper by Jeffrey Paparoa Holman.

What a Landfall! The editor of New Zealand’s liveliest literary and arts magazine has sluiced for gold and come up trumps. Landfall 228 is abuzz with aspirational creativity, showcasing the nation’s best: from the uncanny and the unhomely to the affectionate and the disaffectionate; from the cultural physics of what where how to the pathos and wonder of past present and future … Landfall Aotearoa New Zealand: the narrative journey continues.