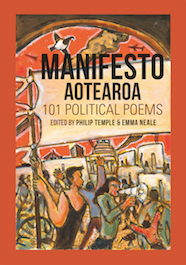 A poem is a vote. It chooses freedom of imagination, freedom of critical thought, freedom of speech. A collection of political poems in its very essence argues for the power of the democratic voice.

Here New Zealand poets from diverse cultures, young and old, new and seasoned, from the Bay of Islands to Bluff, rally for justice on everything from a degraded environment to systemically embedded poverty; from the long, painful legacy of colonialism to explosive issues of sexual consent.

Communally these writers show that political poems can be the most vivid and eloquent calls for empathy, for action and revolution, even for a simple calling to account.
American poet Mark Leidner tweeted in mid-2016 that ‘A vote is a prayer with no poetry’. Here, then, are 101 secular prayers to take to the ballot box in an election year. But we think this book will continue to express the nation’s hopes every political cycle: the hope for equality and justice.

Philip Temple is an award-winning author of fiction and non-fiction, often on subjects associated with New Zealand history and the natural world. He also won an award for his influential writing on electoral reform during the 1992–93 MMP campaign. Philip was the recipient of the 2003 Creative New Zealand Berlin Writers’ Residency and, earlier, held both the Menton Katherine Mansfield Fellowship and the Robert Burns Fellowship. He has received a Prime Minister’s Award for Literary Achievement and been appointed an Officer of the New Zealand Order of Merit (ONZM) for his services to literature. www.philiptemple.com

Emma Neale, who was born in Dunedin, has written six novels – Night Swimming, Little Moon, Relative Strangers, Double Take, Fosterling and Billy Bird – and a number of poetry collections, and has edited anthologies of both short stories and poetry. Neale won the Todd New Writers’ Bursary in 2000, was the inaugural recipient of the NZSA Janet Frame Memorial Award for Literature (2008), and was the 2012 Robert Burns Fellow at the University of Otago. Her poetry collection The Truth Garden won the Kathleen Grattan Poetry Award in 2011, and Tender Machines (OUP, 2015) was longlisted for the inaugural Ockham New Zealand Book Awards. She teaches, works in publishing and looks after her two young children. Emma blogs at emmaneale.wordpress.com

‘Manifesto Aotearoa has given Aotearoa New Zealand literature something it has not had before, or at least not in recent years.’
— Erik Kennedy, takahē, April 2018

‘I immediately liked this book for its dynamism, its stridency, its giving a flying f— about what’s happening to this country. Poetry on the page, in New Zealand at least, seldom raises its voice, so when it does, you prick up your ears and listen.’
— Tim Upperton, The Pantograph Punch, 17 July 2017

‘I enjoyed the week I spent sauntering through Manifesto Aotearoa … This is a good and wide sampling of current concerned opinions, in poetic form, on matters of moment.’
— Nicholas Reid, Reid’s Reader, 15 May 2017

‘Manifesto Aotearoa gives us a version of ourselves, who we are, who we are not, who we might grow to be … This portrayal of a nation through its poets is complex, turbulent, and virtually alive.’
— Carolyn McCurdie, Down in Edin, April 2017