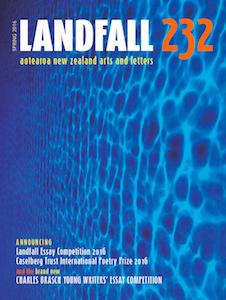 Lawrence Jones on Bloomsbury South: The arts in Christchurch 1933–1953 by Peter Simpson
Vaughan Rapatahana on Coming Rain by Stephen Daisley
Michael Morrissey on The Antipodeans by Greg McGee
Christopher Ward-Greene on Love as a Stranger by Owen Marshall
James Norcliffe on Beside Herself by Chris Price and Fits and Starts by Andrew Johnston
Sally Blundell on A History of New Zealand Women by Barbara Brookes
Edmund Bohan on Outcasts of the Gods by Hazel Petrie and Ka Ngaro Te Reo by Paul Moon
David Herkt on Lost and Gone Away by Lynn Jenner