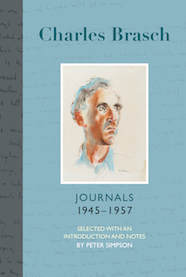 Selected with an introduction and notes by Peter Simpson

This volume of Charles Brasch’s journals covers the years from late 1945 to the end of 1957, when the poet and editor was aged 36 to 48. It begins with his return to New Zealand after World War II to establish a literary quarterly to be published by the Caxton Press. The journals cover the first decade or so of his distinguished editorship of Landfall, a role that brought Brasch into contact with New Zealand’s leading artists and intelligentsia.

His frank and often detailed descriptions of these people – including Frank Sargeson, A.R.D. Fairburn, Keith Sinclair, Eric McCormick, James Bertram, J.C. Beaglehole, Maria Dronke, Fred and Evelyn Page, Alistair Campbell, Bill Oliver, Toss and Edith Woollaston, Denis Glover, Allen Curnow, Leo Bensemann, Lawrence Baigent, Ngaio Marsh, Colin McCahon, James K. Baxter, Janet Frame, Ruth Dallas and many others – are among the highlights of the book. Unmarried and longing for intimacy, Brasch also writes with great candour about his relationships with Rose Archdall, Rodney Kennedy and Harry Scott, revealing a side of himself that has not been known about before.

Central to Brasch’s life was the vocation of poetry. He writes movingly about his own work, and also about his love of nature and the outdoors, including lively descriptions of walking the Milford and Routeburn tracks. The book ends with his visit to Europe in 1957, which confirmed his sense that New Zealand had become for him ‘a centre & a world’.

An introduction by Peter Simpson and other editorial apparatus guide the reader through this engrossing material.

Peter Simpson is a writer, editor and curator who has taught at universities in New Zealand and Canada. He was director of the Holloway Press and a head of English at the University of Auckland, retiring in 2013. Peter has written and edited many books and essays on New Zealand art, literature and cultural history, including titles on Ronald Hugh Morrieson, Allen Curnow, Colin McCahon, Kendrick Smithyman and Leo Bensemann.

Recent projects include Bloomsbury South: the arts in Christchurch 1933–53 (AUP, 2016), and Leo Bensemann & Friends: Portraiture & The Group (2016), an exhibition curated for the New Zealand Portrait Gallery. He lives in Auckland.

‘Reading through this uncensored record of a personal life with its frustrations, affections, loves and loneliness, one is never distant from the life of a man thinking hard about the land [and] its unfinished people … Simpson has done a fine job here of giving us access to both the man and his world.’
– Mark Williams, New Zealand Books, Autumn 2018