The Ones Who Keep Quiet 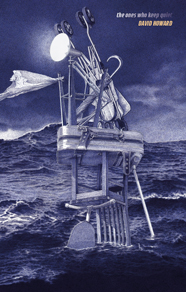 The ones who keep quiet for the longest are the dead, yet there are echoes of them everywhere. A turn of the head brings a glimpse of a Victorian banker retrieving his top hat from the gutter. A walk across a bridge lets you pass the ghosts of a Catholic saint, a Marxist martyr, and a boy with a tin drum. The dead are there to be heard; they are also listening to you.
The Ones Who Keep Quiet showcases David Howard’s ability to give our world a metaphysical mulling, which he achieves with memorable lyricism and an edgy attention to questions of identity and time, silence and isolation. Kathleen Grattan Poetry Award judge Emma Neale noted this new collection’s extraordinary range, from mordant puns and verse drama to unexpected polyphonic juxtapositions, ‘as if the poems have been internally pleated’.

In his judder-bar voice, Dad pulls up Mum:
‘It’s good enough for the likes of us.’ Awake
to the dream of a state house, the sound of an egg beater inside that dream;

on orange formica, the second-best tea set; three ducks above a coke fire
steaming smalls. My sister plaits her hair –
‘Fuck, let’s go to the shops so someone will talk to us.’

David Howard spent 35 years writing The Incomplete Poems (Cold Hub Press, 2011). He is the editor of A Place To Go On From: The collected poems of Iain Lonie (Otago University Press, 2015). He has held the Robert Burns Fellowship (2013), the Otago Wallace Residency (2014), a UNESCO City of Literature Residency in Prague (2016), and the Ursula Bethell Residency at Canterbury University (2016).

‘… deeply inquisitive and metaphysical … the collection is an act of incredible searching – across geography and language – for meaning.’ – Siobhan Harvey, Weekend Herald, 29 July 2017

‘[The Ones Who Keep Quiet] is an intellectually challenging collection by a master poet who knows exactly what he is about.’ – Nicholas Reid, Reid’s Reader, 10 July 2017