Seabirds beyond the Mountain Crest: The history, natural history and conservation of Hutton’s shearwater 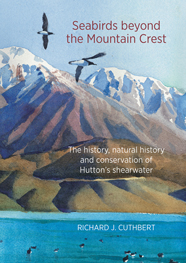 Seabirds Beyond the Mountain Crest tells the fascinating story of New Zealand’s endemic Hutton’s shearwater, a species that breeds only at two remote locations, high in the Kaikoura Mountains. Amateur ornithologist Geoff Harrow is the person most closely associated with the story of Hutton’s shearwater, for it was Geoff who discovered the two remaining nesting sites in the 1960s. For five decades he visited the mountains whenever he could to observe and record the birds, and to encourage the Department of Conservation and its predecessors to take steps to conserve this endangered species.

As a result, scientist Richard Cuthbert was to spend three years living with 200,000 Hutton’s shearwaters and their neighbours, studying their behaviour, observing their interactions, measuring and recording facts and figures to build a detailed picture of why and how these birds had survived. The discoveries over time of Richard and his co-workers turned received wisdom on its head and revealed a whole new predator story.

Richard’s beautifully written, witty account – of the challenge and exasperation, the heartbreak and hardship, and the sheer joy of conservation fieldwork in a remote environment – is beautifully interwoven with other fascinating stories – of the ‘discovery’ of the species by nineteenth-century scientists and collectors, and Geoff Harrow’s discovery of the nesting grounds and subsequent long involvement with this species. Seabirds Beyond the Mountain Crest is a delightful and highly entertaining read.

Richard Cuthbert grew up in the English countryside and had a childhood fascination with nature and a desire to follow in the conservation footsteps of Gerald Durrell, David Bellamy and Sir Peter Scott. After obtaining a zoology degree in the UK and five years travelling in pursuit of mountains and conservation projects, he ended up in New Zealand and embarked on a PhD at the University of Otago studying Hutton’s shearwaters.

His time in New Zealand forged a never-ceasing wonder for the Kaikoura Mountains and the unique species they contain. Since leaving New Zealand Richard has continued to work as a conservation biologist, studying species and places as varied as albatrosses on Tristan da Cunha, vultures in Nepal and India, and bandicoots in Papua New Guinea. He lives in Derbyshire with his wife and son.

‘Seabirds beyond the Mountain Crest must count among the best of our natural history books.’ – Shaun Barnett, Backcountry, March 2018

‘With a mix of conservation, exploration and natural history, Seabirds beyond the Mountain Crest will appeal to mountaineers, twitchers, trampers and those of us who like to read about these things from the comfort of the couch.’
– Sarah-Jane O’Connor, SciBooks, 22 December 2017

‘Seabirds beyond the Mountain Crest is, quite simply, a great read. The author skilfully interweaves the shearwater's known history … with evocative accounts of his own field work.’
– John Cooper, Agreement on the Conservation of Albatrosses and Petrels (ACAP), 5 October, 2017

‘… an elegantly planned and written book – Cuthbert brings in background and logistic details from an impressive variety of disciplines and angles to end up with a story for armchair travellers and outdoor conservationists alike.’
– Mary Cresswell, takahē, April 2018