Archaeology of the Solomon Islands 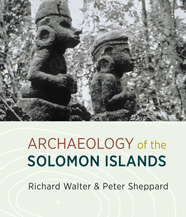 Archaeology of the Solomon Islands presents the outcome of 20 years’ research in the Solomon Islands undertaken jointly by Richard Walter and Peter Sheppard, both leaders in the field of Pacific archaeology. At the time of first European encounter, the peoples of Melanesia exhibited some of the greatest diversity in language, socio-political organisation and culture expression of any region on earth. This extraordinary diversity attracted scholars and resulted in coastal Melanesia becoming the birthplace of modern anthropology, and yet the area remains one of the least well-documented regions of the Pacific in archaeological terms.

This synthesis of Solomon Island archaeology draws together all the research that has taken place in the field over the past 50 years. It takes a multidisciplinary theoretical and methodological approach and considers the work of archaeologists, environmental scientists, anthropologists and historians. At the same time this volume highlights the results of the authors’ own considerable field research. Until recently, much Pacific archaeological research focused primarily on colonisation events and cultural-ecological interactions. Walter and Sheppard are interested too in the long-term development of diversity in coastal Melanesia and in the evolution of ‘traditional’ Melanesian societies. As a case study they focus on the Roviana Chiefdom, an aggressive but highly successful polity based around headhunting, slave raiding and ritual violence that dominated the political economy of the Western Province into the early twentieth century.

They also integrate the Solomon Islands into ongoing models and debates around Pacific culture- history, including in such key areas as human expansion during the Pleistocene, the spread of Austronesians, Lapita colonisation, the development of food production, the role of exchange systems, the concept and meaning of culture areas, and human impact on landscapes and ecosystems.

This fascinating and very readable book is written for an archaeological audience but is also designed to be accessible to all readers interested in Pacific archaeology, anthropology and history. Featuring more than a hundred maps and figures, Archaeology of the Solomon Islands represents a ground-breaking contribution to Pacific archaeology.

Richard Walter is Professor of Archaeology and head of the Department of Anthropology and Archaeology at the University of Otago. In his 30-year career he has authored 50 journal articles, 24 book chapters and six books. His research is field and laboratory based and strives to integrate indigenous and scientific knowledge to construct stronger and more nuanced models of the past. He has ongoing projects in New Zealand, the Cook Islands and the Solomon Islands.

Peter Sheppard is Professor of Archaeology at the University of Auckland. In his 30-year career he has authored 41 journal articles, 39 book chapters and three books, the most recent article being ‘Detecting early tattooing in the Pacific region through experimental use-wear and residue analyses of obsidian tools’, (with Nina Kononenko and Robin Torrence), Journal of Archaeological Science: Reports 8: 147–63.

‘[Archaeology of the Solomon Islands] is a nicely framed and easily readable volume … providing a nice roadmap for future researchers.’
– Martin Gibbs, Archaeology in Oceania, 14 September 2018

‘… a valuable and engaging resource … it is well recommended for all readers interested in Pacific archaeology, anthropology and history.’
– Jacinta Beckwith, takahē, April 2018