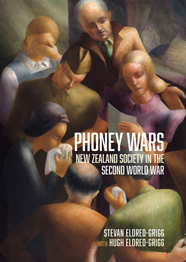 Phoney Wars: New Zealand Society in the Second World War, a new book from Stevan Eldred-Grigg, argues that we had no business going to war against either Germany in 1939 or Japan in 1941. Our motives for doing so were muddled and contradictory. Also we were never in danger of being bombed by any ‘enemy’ air force or invaded by any ‘enemy’ army.

Eldred-Grigg questions the war as a story of ‘good’ against ‘bad.’ Everyone knows the Axis powers behaved ruthlessly, but how many are aware of the brutality of the Allied powers in bombing and starving not only Axis but even Allied peoples? New Zealand colluded in and helped carry out such brutal aggressions. Were we, in going to war, really on the side of the angels?

The author’s previous book, The Great Wrong War: New Zealand Society in World War I (2010), polarised readers, with its author accused by some of betraying his country, while others congratulated him for setting the record straight.

‘Ultimately there was no compelling reason for New Zealand to involve itself in the war … All military effort by the dominion was more or less meaningless. New Zealand could have enjoyed the blessings of its safety without going onto a gruelling and wasteful war footing.’

Nearly eighty years on, the reasons for New Zealand going to war need to be interrogated closely. Was it in the best interests of the people of New Zealand?

Stevan Eldred-Grigg is a leading novelist and historian. His first novel, Oracles and Miracles, was a runaway bestseller. He is the author of many other books, fiction and non-fiction, among them Diggers, Hatters and Whores: The story of the New Zealand gold rushes (2008), and White Ghosts, Yellow Peril: China and New Zealand, 1790–1950 (2014). Two earlier books focused on the world wars. Kaput! (2000) is a novel that tells the story of an ordinary German housewife and mother coping with Nazi dictatorship and Allied bombing. His previous book (2010) polarised readers with its trenchant criticisms. He now turns his uncompromising gaze on WWII.

Hugh Eldred-Grigg was born in Canterbury and graduated with an MA in political science from Victoria University of Wellington. Since graduating he has worked as a teaching assistant at VUW, a high school language teacher in Japan, a lecturer at Xiamen University in China, and a high school teacher in Estonia. Still in Estonia, at present he works in financial technology. He is the author of ‘What if the Moyle Affair had never happened?’ in Stephen Levine (ed.), New Zealand as it Might Have Been (VUP, 2006).