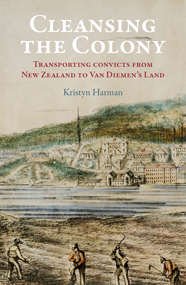 It’s no secret that Van Diemen’s Land (Tasmania) was a penal colony for British convicts. Yet surprisingly at least 110 New Zealand prisoners were also transported to the island in the nineteenth century to serve time as convict labourers.

In examining the remarkable experiences of unremarkable people, this fascinating book provides insights into the lives of people like William Phelps Pickering, a self-made entrepreneur turned criminal; Margaret Reardon, a potential accomplice to murder and convicted perjurer; and Te Kumete, a Maori warrior transported as a rebel. Their stories, and others like them, reveal how New Zealand’s governing class was intent on cleansing the colony of what it considered a burgeoning criminal underclass. Van Diemen’s Land became a dumping ground for New Zealand’s unwanted.

Author Kristyn Harman offers insights into penal servitude in Van Diemen’s Land as revealed through the lived experiences of the men and sole woman transported from New Zealand. Whether Māori men serving time for political infractions, white-collar criminals, labourers, vagrants or the soldiers sent to fight the empire’s wars, each convict’s experiences reveal something about the way in which the British Empire sought to discipline, punish and reform those who trespassed against it.

Kristyn Harman is a New Zealander living in Australia. She is the author of Aboriginal Convicts, which won the Australian Historical Association’s Kay Daniels Award for convict history in 2014. Kristyn studied history at Massey University and undertook doctoral research at the University of Tasmania where she now lectures in the School of Humanities. Her expertise spans topics across the Tasman Sea and the nineteenth and twentieth centuries, largely focusing on the Australasian colonies and the British Empire. Cleansing the Colony is her second book.

‘A book on this subject has been waiting for a good historian. Cleansing the Colony is full of acute analysis and fascinating details.’
– Babette Smith, The Australian, 7 April 2018

‘… a fantastically energetic book about a fledgling colonial society that’s half priggish utopians, half irrepressible lowlifes, reading more like Herbert Asbury’s The Gangs of New York than some drab textbook.’
– Joseph Barbon, The Reader, 8 February 2018