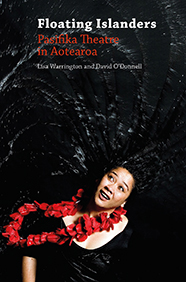 ‘We float – we’re not based in one place – we’re floating Islanders. I always come back to theatre, theatre is my first home.’ – Makerita Urale

This book features the achievements of many individuals and theatre companies, including Pacific Underground, Pacific Theatre Inc, The Laughing Samoans, The Conch, The Naked Samoans, Black Friars, We Should Practice and Kila Kokonut Krew amongst others, and provides a vivid and insightful guide to the diversity of styles and themes of Pasifika theatre.

The immigrant experience of living in two worlds is often seen as troubled, but co-author Lisa Warrington says this ‘in-between-ness’ has been turned to advantage in Pasifika theatre to create unique and often subversive performances.

“Pasifika theatre has become a major platform of expression for stories of the Pacific diaspora, with themes such as migration, family, cultural identity and the questioning of stereotypes,” says Warrington.

Not only is Pasifika theatre a success story within the performing arts in New Zealand, it is also an intriguing case study of migrant theatre that has international resonance, says co-author David O’Donnell.

“These artists are part of a larger movement of Pasifika creativity in visual arts, music, film, television and literature. They demonstrate creative energy, humour and enterprise, and embrace collective creation and cross-cultural input.”

Floating Islanders features a comprehensive performance listing as well as 32 pages of stunning colour and black and white photographs of practitioners and performances.

Lisa Warrington is an associate professor in theatre studies at the University of Otago. She has directed over 125 productions, including 30 for Dunedin’s professional company the Fortune Theatre. She has commissioned new works and served as director or dramaturg with Playmarket (the national playwrights’ agency) on a number of new play workshops. She co-edited Playlunch, a volume of short plays that is now in its second edition (OUP), and has published a number of articles on New Zealand theatre and colonial theatre history.

David O’Donnell is an associate professor in theatre at Victoria University of Wellington. He has directed many premieres of New Zealand plays, including Heat by Lynda Chanwai-Earle and West End Girls by Ken Duncum. In 2004 he was voted director of the year in the Chapman Tripp Theatre Awards for directing David Edgar’s Albert Speer, and in 2015 he won a Po`okela directing award from the Hawai`i State Theatre Council. David has published widely on New Zealand theatre, including co-editing (with Marc Maufort) Performing Aotearoa (2007), and has been editor of the Playmarket New Zealand Play Series since 2010.