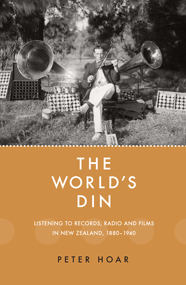 The arrival of radical new audio technology from overseas in the late 19th century led to a 'sonic revolution' that changed New Zealanders lives forever, says author Peter Hoar.
In his new book The World's Din, he describes the arrival of the first 'talking machines', and their growing place in New Zealanders' lives, through the years of early radio to the dawn of television.
From the first public demonstration of a phonograph in a Blenheim hall in 1879, people were exposed to a succession of machines that captured and transmitted sounds through radio, cinema and recordings, says Peter Hoar.
'This was a radical change, signifying a defining break from the past,' he says.
'Human experience of the world changed forever during the late 19th and early 20th centuries because of these technologies.'
'Audio' since then has been a continued refinement of the original innovation, even in the contemporary era of digital sound, with iPods, streaming audio and Spotify.
The World's Din is a beautifully written account that will delight music-lovers and technophiles everywhere.Without further ado, it is time to crank the gramophone, or tune the wireless, or open the Jaffa box as the cinema lights dim, and hearken to the richness and variety of listening in New Zealand’s past soundscapes.

Dr Peter Hoar has taught radio and media history at Auckland University of Technology for 20 years. Before joining AUT he worked in radio, television and journalism, and is also a qualified librarian. His research interests are in the field of sound studies, particularly in history, listening practices and technology. He regularly contributes concert reviews to Radio New Zealand Concert's arts programme Upbeat as well as documentaries on composers and music. Peter is a passionate believer in the need for well-funded public media.