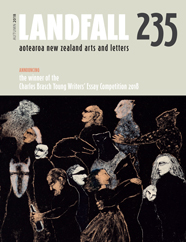 Landfall is New Zealand's foremost and longest-running arts and literary journal. It showcases new fiction and poetry, as well as biographical and critical essays, and cultural commentary.

Landfall Review Online: books recently reviewed
Chris Else on Moonshine Eggs by Russell Haley
Stephanie Johnson on Decline and Fall on Savage Street by Fiona Farrell
Owen Marshall on Tess by Kirsten McDougall
Chris Tse on What Is Left Behind by Tom Weston; Rumpelstiltskin Blues by John Adams; Tales of the Waihorotiu by Carin Smeaton
Ray Grover on Phoney Wars: New Zealand society in the Second World War by Stevan Eldred-Grigg with Hugh Eldred-Grigg
Genevieve Scanlan on Hoard by Fleur Adcock; Field Notes by Mary Cresswell; Luminescent by Nina Powles
Philip Temple on Edmund Hillary: A biography by Michael Gill
Tom Brooking on Tōtara: A natural and cultural history by Philip Simpson