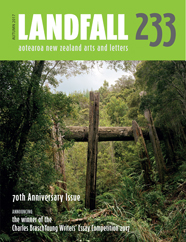 Landfall is New Zealand's foremost and longest-running arts and literary journal. It showcases new fiction and poetry, as well as biographical and critical essays, and cultural commentary.

Second place went to Mia Rutledge for ‘We Are Nothing Without Our History’, and third placegetter Alexandra McKendry for  ‘A Facebook Free Diet’

Paul Moon on Artefacts of Encounter, eds Nick Thomas et al.
Kristyn Harman on Mothers’ Darlings of the South Pacific, eds Judith A. Bennett & Angela Wanhalla
Edmund Bohan on The Big Smoke: New Zealand cities 1840–1920 by Ben Schrader
Chris Else on My Father’s Island by Adam Dudding
James Norcliffe on Beside Herself by Chris Price and Fits and Starts by Andrew Johnston
Airini Beautrais on Playing for Both Sides: Love across the Tasman by Stephanie Johnson and Late Love: Sometimes doctors need saving as much as their patients by Glenn Colquhoun
Peter Bland on Selected Poems by Gordon Challis
Murray Edmond on Shooting Gallery by Wes Lee
Erena Shingade on Lucky Punch by Simone Kaho and This Explains Everything by Richard von Sturmer
Jeffrey Paparoa Holman on The Collected Poems of Alistair Te Ariki Campbell