New Zealand’s betrayal of the people of West Papua 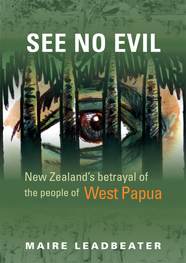 See No Evil issues a challenge to New Zealanders. The book begins by relating the little-known history of West Papua, but its focus is on the impact of New Zealand’s foreign policy on the indigenous Melanesian inhabitants. In the 1950s New Zealand supported self-determination for the former Dutch colony, but in 1962 opted to back Indonesia as it took over the territory.

Delving deep into historical government archives, many of them obtained under the Official Information Act, this meticulously researched book uncovers the untold story of New Zealand’s unprincipled and often hypocritical diplomacy. The consequences of repressive Indonesian rule have been tragic for the West Papuan people, who are experiencing ‘slow genocide’. West Papua remains largely closed to foreign journalists, but its story is now beginning to be heard. A growing number of Pacific Island nations are calling for change, but so far New Zealand has opted for caution and collusion to preserve a ‘business as usual’ relationship with Indonesia.

See No Evil is a shocking account by one of New Zealand’s most respected authors on peace and Pacific issues, issuing a powerful call for a just and permanent solution – self-determination – for the people of West Papua.

MAIRE LEADBEATER grew up in a politically active family, where campaigning for peace and many other causes came with the territory. A former Auckland city and regional councillor, she spent her working life as a social worker, but is now retired and finding more time for writing and for activism. For the past 25 years Maire has campaigned for freedom for East Timor and West Papua. In 2017 she was awarded the Order of Timor-Leste by the Timorese Government. Her previous books are Negligent Neighbour: New Zealand’s collusion with the invasion and occupation of Timor Leste (2006) and Peace, Power and Politics: How New Zealand became nuclear free, published by Otago University Press in 2013. Maire has two adult children and five grandchildren.

‘[See No Evil] is a deeply interesting and moving portrait of a country trying to gain political independence in a rigged system.’ – Unity Books, 2 August 2018