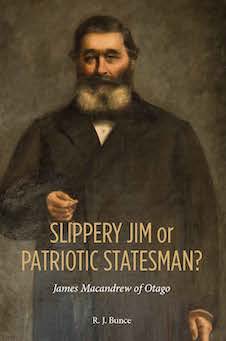 This is a biography of one of New Zealand’s most colourful and persuasive politicians.

When James Macandrew arrived in Dunedin from Scotland in 1851, other settlers were impressed by his energy and enthusiasm for new initiatives. With his finger in a lot of commercial pies, he set about making himself a handsome income which he eventually lost, declaring himself bankrupt and ending up in a debtors’ prison for a time.

Politics became another enterprise at which he threw himself with a passion. Macandrew was a member of Otago Provincial Council for 10 years, during which time he held almost all the elected positions in that body. He was superintendent of Otago for a further decade, and at the same time he was a member of parliament for 29 years.

This is the warts-and-all story of a Victorian settler who was a devoted family man, a staunch Presbyterian and a consummate politician. It examines the numerous local institutions that benefited from Macandrew’s touch – the University of Otago, the Art School (now Otago Polytechnic School of Art), the Normal School (later the College of Education) – along with his contributions to the building of roads, railways, wharves, harbours, schools and churches.

Macandrew made plenty of enemies along the way, and has been severely judged by history. This re-examination of his life and political work reveals a man who both inspired and infuriated
the citizens of Otago, and New Zealand, for almost four decades.

R.J (JO) BUNCE has held teaching and administrative positions in most levels of the education sector, as well as public relations and liaison positions for government departments, Otago Polytechnic, the University of Otago and the Royal New Zealand Navy. Later in life he gravitated towards historical study and research, and this book is the result.