The Moon in a Bowl of Water 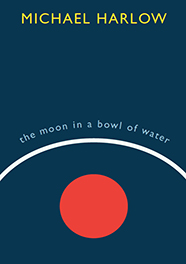 Bound together by myth and music, Michael Harlow’s The Moon in a Bowl of Water is a stunning new collection from a poet in complete control of his craft.
Harlow is the maestro of the prose poem. Here he presents a collection of small human journeys, with a strong emphasis on narrative. The work is consciously rooted in Greek mythology and in the idea of storytelling as a continuous river, flowing from the ancients to the present, telling one story on the surface, but carrying in its depths the glints of ancient archetypes, symbols and myths. Each poem is studded with associations that hark back millennia.
Harlow delights in the airiness of the imagination and the magic of transformation, especially through the power of language. Words become ‘thought-birds’ that can be caged, coaxed to sing, or allowed to fly, and the poems’ sonic after-effects echo and re-echo in the reader’s mind and ear.

Michael Harlow is one of New Zealand’s leading poets. He has published eleven books of poetry, including Sweeping the Courtyard, Selected Poems (2014), Heart, Absolutely I Can (2014), Cassandra’s Daughter (2005, 2006), The Tram Conductor’s Blue Cap (a finalist in the 2010 National Book Award for Poetry), and Take a Risk, Trust Your Language, Make a Poem (awarded the PEN/NZ Best First Book of Prose, 1986). He has received many prestigious awards and held a range of residencies, including the Katherine Mansfield Memorial Fellowship and the Burns Fellowship. His poetry collection Nothing for it But to Sing won the Kathleen Grattan Award for an unpublished poetry manuscript and was published by Otago University Press in 2016. In 2018 he was awarded the Prime Minister’s Award for Literary Achievement in Poetry.