The Mosses of New Zealand 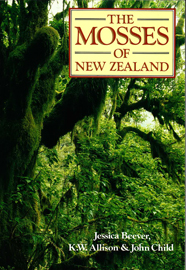 Mosses are small but beautiful plants, responsible in part for the lush appearance of New Zealand's rainforests. They form an important part of the vegetation in almost all environments: in alpine and lowland areas, on coastal cliffs, in pastures and lawns and even in cracks on city pavements.

The Mosses of New Zealand describes in detail the life and structure of these fascinating plants, enabling both the enthusiastic amateur and the professional botanist to identify their many and diverse forms.

Jessica Beever has completely revised Allison and Childs' 1971 edition of The Mosses of New Zealand, detailing a much greater number of mosses, including newly discovered species. An extensive key and bibliography, 25 black and white and 50 colour photographs plus over 80 of Dr Beever's own line drawings make this the definitive reference book in its field.

Jessica Beever, née Spragg, has Pākeha and Māori (Ngāti Toa, Te Ati Awa and Ngāti Mutunga) ancestry. She has degrees in Botany (BSc and MSc) from the University of Auckland, and a PhD in Plant Science from the University of Leeds, UK.
As a frequent participant in the John Child Bryophyte Workshops from their inception in 1983, a member of the Department of Conservation’s expert panel on threatened bryophytes and a member of the Offshore Islands Research Group, she has specialised in the documentation of New Zealand’s mosses, and has stimulated the resurgence of interest in these small plants. An endemic moss genus, Beeveria, has been named in her honour. Currently she is a Research Associate of Manaaki Whenua - Landcare Research, working on the Flora of New Zealand: Mosses.