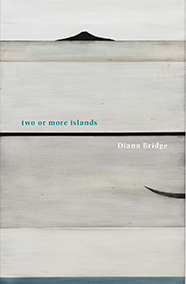 Diana Bridge’s subjects are reflected through a range of cultural lenses. To engagement with Western and New Zealand literature should be added her immersion in the great Asian cultures of China and India. Her poetry is an intricate meshing of realities and possesses a remarkable depth and richness of perspective. These are poised, elegantly wrought poems, full of lively intelligence and verbal deftness.

Since Baxter, most New Zealand poets have shied away from the use of myth in their poetry. In this collection, Bridge mines this vein for its deeply traditional and personal resonances. She knows, as firmly as did Jung, that ‘myths give us pictures for our emotions’. Here, the poems that openly glance off myth are brief, fresh takes that centre on the heroines of Western Classical legend. They begin in an irony that is needed to cope with the sometimes shocking stories, then range through time to alight with radical brevity on Shakespeare and English history. The refrain of the past narrows down to the notion of the family,

No one of us today
is of the House of Atreus –

Just meet the Family,
I say.

The book concludes with ‘The Way a Stone Falls’, 22 poems set in Southeast Asia. The sequence takes on board the Cambodian tragedy of last century by way of headless statues – taking a sideswipe at French colonialism. It confronts the hardest decision in the whole Hindu tradition, that of Arjuna in the Bhagavad Gita. This is how Bridge finds her way in the world – a place of trees and people and noise and contingency – with the assurance that myth tells her story as well as its own.

Two or More Islands is the seventh collection of poetry by Diana Bridge. In 2010 she was presented with the Lauris Edmond Memorial Award for Poetry, and in 2014 she won the Landfall Essay Competition with her essay ‘An attachment to China’. Bridge won the Sarah Broom Poetry Prize in 2015. The chief judge, Irish poet Vona Groarke, described her work as ‘possibly amongst the best being written anywhere right now’. The same year, Bridge was invited to take up a residency at the Writers’ and Artists’ Colony at Yaddo in upstate New York, the first New Zealander since Janet Frame to go there. In the Supplementary Garden: New and selected poems was longlisted for the Poetry Prize in the 2017 Ockham New Zealand Book Awards. She has studied Chinese language, literature and art history, and holds a PhD in Chinese poetry from the Australian National University.

'This is a collection quite unlike almost any New Zealand poetry I can think of, one that makes its own totally justifiable demands as it achieves a level of rare impressiveness.'
– Vincent O’Sullivan

'Bridge’s poems are full of beauty and conviction.'
– Hamesh Wyatt