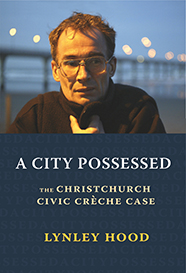 Originally published in 2001, A City Possessed is the harrowing account of one of New Zealand’s most high-profile criminal cases – a story of child sexual abuse allegations, gender politics and the law.

In detailing the events of the 1990s that led up to and surrounded the allegations made against several staff of the Christchurch Civic Crèche, author Lynley Hood shows how and why such a case could happen. A City Possessed won the Montana Medal for Non-Fiction at the 2002 Montana New Zealand Book Awards.

Her penetrating analysis of the social and legal processes by which the conviction of Peter Ellis was obtained, and repeatedly upheld, raises major issues for our justice system and the way we see ourselves. Peter Ellis served seven years of a 10-year jail sentence for abusing seven children at the Christchurch Civic Crèche. He has always maintained his innocence, and has gained widespread support for what many see as a miscarriage of justice.

This paperback edition comes at a time when Peter Ellis and the Christchurch Civic Crèche case have returned to public attention. In July 2019, a terminally ill Ellis was granted a final appeal to the Supreme Court, scheduled for November 2019.

Award-winning author LYNLEY HOOD holds a MSc in Physiology and a LittD for ‘published contributions of special excellence in literary, social and historical knowledge’. Her previous books include Sylvia! The Biography of Sylvia Ashton-Warner and Minnie Dean: Her life and crimes. Lynley lives in Dunedin – five minutes’ walk from the big house on a big section where she and her late husband Jim raised their three children. A rare visual disorder has given her common cause with the poor, the disabled and the elderly who use the buses and walk, and has brought her far more interesting conversations with total strangers than she ever had when she drove a car.

Her passion for tilting at windmills remains undimmed.