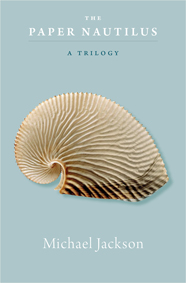 The Paper Nautilus is about loss – the forms it takes, how we go on living in the face of it, and the mysterious ways that new life and new beginnings are born of brokenness. The paper nautilus provides a vivid image of this interplay of death and rebirth since, for new life to begin, the angelically beautiful but fragile shell that sustained a former life must be shattered.

Michael Jackson has recourse to his ethnographic fieldwork among the Kuranko of Sierra Leone, as well as autobiography and fiction, in exploring his theme. This book crosses and blends genres most engagingly. Beginning as a series of essays, it gradually morphs into a mesmerising work of the imagination in which the boundary between author and other becomes blurred, and the line between fact and fiction erased.

Through novels, poetry, and unorthodox theoretical texts, Michael Jackson has done more than any other living scholar to explore and expand forms of ethnographic writing. His encounters in Sierra Leone have inspired a series of publications that move progressively free from the bounds of standard genre – from classical monograph to fable analysis to oral history to a variety of biography/memoir hybrids – so as to explore various constellations of consistent themes including travel, struggle, storytelling, social interaction, and personal introspection.
– Samuel Mark Anderson (American Ethnologist 43 (2), 2016)

US-resident New Zealand writer MICHAEL JACKSON is the author of 35 works of anthropology, poetry, fiction and memoir, and is internationally renowned for his work in the field of existential anthropology. In New Zealand he is best known for his poetry and creative non-fiction. Latitudes of Exile was awarded the Commonwealth Poetry Prize in 1976, and Wall won the New Zealand Book Award for Poetry in 1981. His most recent books include Harmattan: A philosophical fiction (2015), Selected Poems (2016), and The Varieties of Temporal Experience: Travels in philosophical, historical and ethnographic time (2018).