The Twelve Cakes of Christmas: An evolutionary history, with recipes 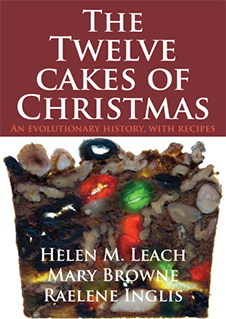 Many popular recipes come from lineages that can be traced back for decades, even centuries. Festive cakes have been made in December for at least two thousand years. Using archaeological evidence and ancient books, the authors define the key ingredients of the cakes that would eventually be served on Twelfth Night, at the end of the Christmas season. From 17th century English cookbooks, they identify recipes that would have been made as twelfth cakes, full of expensive ingredients like raisins, almonds, sweet wine and candied peel, but made like fruit-breads, with yeast.

In the 18th century, a revolution in mixing occurred. Ingredient proportions followed the new pound cake principle, and for the first time butter and sugar were creamed together. The Victorian age saw Twelfth Night customs give way to those associated with Christmas Day. The first English recipe to be called 'Christmas Cake' was Mrs Beeton's. In the colonies, growing demand for rich Christmas cakes resulted in the renaming of a range of recipes. Plum cakes, rich fruit cakes and wedding cakes were all co-opted as Christmas cakes.

The Christmas cakes of the 20th century are a special focus of this book. Nine cake recipes feature here, four derived from pound cakes, and five highlighting new methods of mixing or new ingredients. Their family histories are tracked, but the authors also show how New Zealand cooks modified each recipe and developed new variations.

‘Once you have got your mouth watering – and it will be – you can then turn an entertaining history into a practical cook book. No stone is left unturned – there is even a history of royal icing and instructions for how to make your own ... Fun, enlightening, and filling. A perfect Christmas treat.’ – D-Scene, 21 December 2011

MARY BROWNE is a leading food writer who updated and photographed twelve classic pavlova recipes for The Pavlova Story.

RAELENE INGLIS is a researcher in food history. Her earlier investigations into Christmas cakes with Helen created the database from which this book has grown.

OUT OF PRINT – available as Ebook