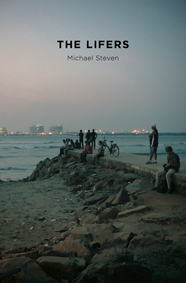 Get in! Hurry the fuck up! Go! Go! Go! From Sean Macgregor’s lounge occupied by stoned youths, to three bank robbers en route to the Penrose ANZ, Michael Steven’s second collection presents his clear, clean vision of ‘the lifers’ who inhabit these islands and beyond.

A generation’s subterranean memories of post-Rogernomics New Zealand are a linking thread, in the decades straddling the millennium, while other poems echo with the ghostly voices of the dead, disappeared and forgotten.

Steven’s writing neither patronises nor romanticises in its intricate depictions of small worlds of violence, despair, love and struggle. Always it refers back to the redemption of human connection as its magnetic pole.

MICHAEL STEVEN is the author of the acclaimed Walking to Jutland Street (Otago University Press, 2018). He was recipient of the 2018 Todd New Writer’s Bursary, and his poems were shortlisted for the 2019 Sarah Broom Poetry Prize. He lives and writes in West Auckland.

Steven’s eye for detail and his knowledge of lives outside the conventional realm of poetry coupled with an acute sensitivity to his stance as the other have enabled him to develop a unique body of work. In many ways, his narratival style belies the complexity of his craft insofar as he manages to evoke places and people from the position of both an insider and an observer. – Catherine Dale, Jacket 2

Michael Steven is a man apart. Steven has lurked long and large on the periphery of New Zealand’s literary establishment. He is the manifest talent, with his proverbial feet on the
ground. Steven has a knack for exhuming marvelousness from the grit and gunk of life at the coalface. – Elizabeth Morton, Poetry New Zealand Yearbook 2019

To paraphrase Jon Landau somewhat, I have seen the future of Aotearoa New Zealand poetry. Michael Steven is slap bang in its nexus. His is an immense and immensely refreshing talent. – Vaughan Rapatahana, Landfall Review Online