The story of three homosexual New Zealand soldiers in WWII 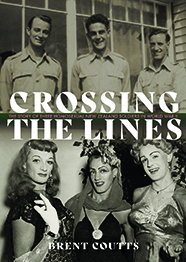 In Crossing the Lines, Brent Coutts brings to light the previously untold history of New Zealand homosexual soldiers in World War II, drawing on the experiences of ordinary men who lived through extraordinary times.

At the centre of the story are New Zealand soldiers Harold Robinson, Ralph Dyer and Douglas Morison, who shared a queer identity and love of performance. Through their roles as female impersonators in Kiwi concert parties in the Pacific and Egypt they found a place to live as gay men within the military forces, boosting the morale of personnel in the Pacific Campaign and, along the way, falling in love with some of the men they met.

Crossing the Lines is a richly illustrated account that follows the men from their formative pre-war lives, through the difficult wartime years to their experiences living in a postwar London where they embraced the many new possibilities available. It is a story of strong friendships, the search for love and belonging as homosexuals within the military and civilian worlds, and the creation of the foundation of the queer community today.

Brent Coutts is a University of Otago graduate living in Auckland. He is the author of Protest in New Zealand (2013), Re-Reading the Rainbow (2017) and Pacific History (2018), which focus on themes of social justice, identity and decolonisation. In 2009 he was awarded the Royal Society Teaching Fellowship from the Royal Society Te Apārangi, which allowed him to begin research into New Zealand soldiers’ experiences during World War II.

Newsroom review: Full of joy and more than a little sex