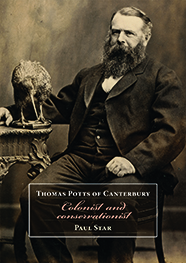 In 1858 Canterbury settler Thomas Potts protested against the destruction of tōtara on the Port Hills near Christchurch. A decade later, as a member of Parliament, he made forest conservation a national issue. Through his writing he raised the then novel idea of protecting native birds on island reserves, and proposed the creation of national ‘domains’ or parks. As a pioneering colonist, acclimatist and runholder, however, Potts’ own actions threatened the very environments he sought to maintain. This makes him a fascinating subject as we confront present-day problems in balancing development and conservation.

This book is about, and partly by, Potts, and through him about New Zealand and the course and consequences of colonisation. It describes and interprets his life, from his early years in England through to his 34 years in New Zealand. Excerpts from Potts’ vivid 1850s diary, written from close to the edge of European settlement, are published here for the first time. Thomas Potts of Canterbury also reproduces 11 long-forgotten essays by him from the 1880s, in which he reflected on the 1850s and what had happened since – both to New Zealand’s natural environment and to Māori and Pākehā. Sixteen pages of contemporary images supplement the text.

Thomas Potts of Canterbury will appeal to anyone interested in the early history of Canterbury, in environmental change, and in early efforts in New Zealand towards conservation. It is a story of conflicting goals, magnificently exemplified in the life and writings of a man who strove, 150 years ago, to be both colonist and conservationist.

Paul Star was born in England in 1950 and has lived in New Zealand since 1972. He holds a master’s degree in European history and English literature from Cambridge University. He gained a further master’s and a doctorate from the University of Otago, focusing on nineteenth-century New Zealand environmental history. As a postdoctoral fellow at Otago he contributed to the Marsden-funded Empires of Grass project, which studied the transition of much of New Zealand from native forest to exotic pasture. Paul has published 30 articles in New Zealand, Australian and British journals, and wrote the chapter on environmental history in the new Oxford History of New Zealand. He lives and gardens on the Otago Peninsula.