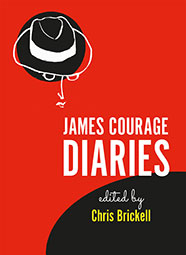 This blacked-out, bourgeois, boarding-house life – God in Heaven, how I really loathe it! The smell of evening cooking in the passages, the businessmen’s faces, the church clock chiming the polite quarters down the street – the whole couchemar d’une incessante mise en scène. Pfui! Am I alive or dead? What I want is to get drunk, to lie in the hot and generous sun, to sleep with wild boys – yes, that is more like it. – James Courage, Diary, 24 Jan 1941.

New Zealand author James Courage was born in Christchurch in 1903, and he became aware of his homosexuality during his adolescent years. He moved to London in 1927 and began writing novels, plays, poems and short stories. He was much more sexually open than most of his homosexual writer contemporaries – Frank Sargeson, Eric McCormick, Charles Brasch and Bill Pearson. A Way of Love, published in 1959, was the first gay novel written by a New Zealander, and some of his other seven novels (including Fires in the Distance and The Call Home) contain queer characters.

Between 1920 and 1963, Courage confided his innermost thoughts to a private diary. He wrote about leaving New Zealand, the men he met in London’s streets, and forging friendships in the literary scene. He was an evocative chronicler of landscapes and indoor settings: life on long ocean voyages, air raid shelters during the war, and the psychiatrist’s clinic at a time when society was deeply ambivalent about homosexuality. Courage recorded his personal triumphs and struggles with an engaging honesty, a lively intelligence, and a whimsical sense of humour.

Chris Brickell’s selections from the 400,000 words of diary entries reveal Courage to be a truly engaging man, a complex personality and an astute observer with a gentle, whimsical sense of humour, an acerbic wit and an artist’s appreciation of art. Courage’s diaries are a delightful surprise … James Courage is revealed to be both a
significant writer and a sensitive, brave and engaging New Zealander we should be proud to own and celebrate. – Paul Millar

What a wealth of contemporary detail is here about the shadow world (to many readers) of covert sexual engagement, and the sharp and engaging portrait of a middle-class privileged life, with its travel and its civilian experience of war. I also found of great interest his gradual change from an almost copy-book privileged aesthete, to a late in the day socialist. – Vincent O’Sullivan

Review: Sam Brooks for The Spinoff

Interview: Chris Brickell in the Star

Editor Chris Brickell offers a portrait of the author

CHRIS BRICKELL is Professor of Gender Studies at the University of Otago. His books include Mates and Lovers: A history of gay New Zealand (2008), Manly Affections: The photographs of Robert Gant, 1885–1915 (2012), Teenagers: The rise of youth culture in New Zealand (2017) and Queer Objects (2019), which he co-edited with Judith Collard.