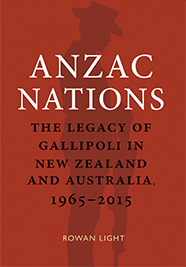 In Anzac Nations: The legacy of Gallipoli in New Zealand and Australia, 1965–2015, author Rowan Light examines the myth-making around Anzac and how commemoration has evolved – from 1965, when many assumed that the tradition of remembering the Anzacs would not survive beyond the death of the last Gallipoli veteran, to the Anzac Centenary in 2015 when the Australian federal government outspent all other countries, and New Zealand’s centenary programme was the largest commemoration in the country’s history.

Anzac Nations explores how societies make meaning and express value and beliefs through practices such as remembrance and commemoration. Why do we see the Gallipoli campaign, fought over a hundred years ago in a far-flung corner of the world, as an expression of national belonging? What shapes this collective remembrance in Australia and New Zealand and how do commemorations differ between the nations? Who has authority over what is – and is not – remembered on 25 April, and why does this national memory focus so heavily on the place and experience of Gallipoli, rather than on other aspects of past violence at home or abroad?

Anzac Nations examines three key aspects: the changing and contested meanings of Anzac from the 1960s to the 1980s; the expanded role of the state in commemoration since 1990; and responses to these shifts by Indigenous and non-Indigenous communities.

In Anzac Nations, Light brings together stories and evidence from both sides of the Tasman, offering a sweeping panorama of memory that includes writers and filmmakers, protestors and prime ministers, and public audiences who have come to see Anzac Day as their own.

Rowan Light is a Pākehā historian at the University of Auckland Waipapa Taumata Rau where he teaches Aotearoa New Zealand histories. He is also project curator at the Auckland War Memorial Museum Tāmaki Paenga Hira, assisting with research on the history, remembrance and commemoration of the New Zealand Wars.