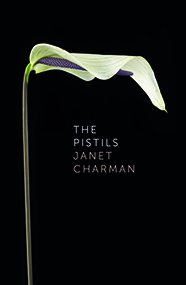 The Pistils is a dispatch from the cusp of change. It appears at the severing of a 40-year relationship following the illness and death of poet Janet Charman’s partner during the Covid restrictions.

Here, she chronicles her experience with transition – to the digital age, to single life, to carbon neutral. She dissects her Pākehā sensibilities towards colonizing privilege as well as her gender-critical feminist’s astonishment at attacks from allies in the realm of sexual politics.

In The Pistils, Charman regards her separation from her grown children in the light of her own parents’ deaths. And she looks to a future in which the crises she anticipates, both personal and environmental, are treated as no less inevitable than they will be mysterious.

Janet Charman is one of New Zealand’s sharpest and most subversive writers. In 2008 she won the Montana Book Award for Poetry for her sixth collection, Cold Snack. In 2009 she was a Visiting Fellow at the International Writers’ Workshop of Hong Kong Baptist University. In 2014 she appeared as a Guest Reader at the Taipei International Poetry Forum. Her collection 仁 Surrender (2017, OUP) chronicles her writing residencies in Hong Kong and Taiwan. This is her ninth collection of poetry.