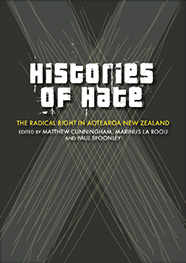 This volume reveals the complexities of Aotearoa’s radical right traditions and discusses how, through time, various groups have been animated by a diverse mix of ideas, idealogues, organisations, social clubs and political parties.

The text puts a wide range of topics under a direct and critical lens. Colonisation, antisemitism, discrimination against Chinese immigrants, anti-communism, skinhead gangs, support for white minority governments in southern Africa, opposition to Māori Treaty rights, the religious right, and recent events such as the 15 March 2019 terrorist attacks in Christchurch and the rise of COVID-19 conspiracy theories are all covered.

In Histories of Hate, editors Matthew Cunningham, Marinus La Rooij and Paul Spoonley have brought together experts from multiple disciplines, including historians, sociologists, political scientists, kaupapa Māori scholars, and experts in religious and media studies, to create a benchmark text that will be the definitive reference for years to come.

A compelling read and an important, timely book, Histories of Hate traverses Aotearoa’s socio-political and extreminist landscape in both historical and contemporary contexts, shedding light on the social and cultural intolerances that continue to shape New Zealand society to this day.

Marinus La Rooij has degrees in history and religious studies from the University of Otago and Victoria University of Wellington and has published on antisemitic conspiracy theories in 1930s New Zealand and Australia. Marinus has worked for the Waitangi Tribunal as a district inquiry facilitator and for the Crown Forestry Rental Trust as a research manager.

Paul Spoonley completed his PhD on the New Zealand radical right in the 1980s. He is a Distinguished Professor of Sociology at Massey University, and until 2019 was the Pro-Vice-Chancellor of the College of Humanities and Social Sciences. He received the Science and Technology Medal from the Royal Society for his contribution to cross-cultural understanding in 2009 and was made a Fellow of the Royal Society of New Zealand in 2011.