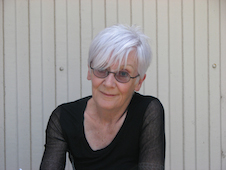 Cilla McQueen's newly released In a Slant Light: A poet's memoir launches next week in Dunedin. We asked some New Zealand poets to tell us about their favourite poems or collections by Cilla. Here are their answers:

BRIAN TURNER
Fire-Penny is a collection I like a lot. Accessible, insightful, poignant, wry and rooted in her places and people. Those are some of the things I like about her poetry and why it matters.

MICHELE LEGGOT
Well, that's a hard thing to decide. Can I have 'Kitchen Table' (from Markings, 2000) and the wonderful duo that is Fire-Penny and A Wind Harp (2005 and 2006)? Searing, beautiful stuff, all of it but especially the CD.

IAN WEDDE
'To Ben, at the Lake' has been a favourite of mine from the start, it has those qualities of precision, delicacy and that uncanny moment when depth appears within or below elegant surface – or, as Barthes memorably wrote of photographs, 'Depth is born only at the moment the spectacle itself slowly turns its shadow toward man and begins to look at him.'

EMMA NEALE
I will choose ‘Shopping’, from Axis, because of the way it so musically marries the mundane, routine and yet necessary (the shopping list!) with deep feeling and mystery; it moves from factual, casual itemisation to a lyrical swoop into French, wisps of almost Shakespearean and then Stevens-like phrasing; it shows how the mind can rove and fly from the small, ordinary thing to fear, affection, loss, memory. I love the way it starts as a rhythmic list poem, uses expressive white space like a kind of gasp or a moment to gather thoughts, moves into the lyrical, yo-yos from comedy to something wistful and warm. It’s a poem that seems to contain volumes of poems.

BILL MANHIRE
A sentimental choice, mine. I’d go for Cilla’s first book, Homing In. The poems shift around a lot – all those people and places! – but the author is already sounding entirely like herself. She’s lyrical, musical, alert to the dance of consonant and vowel, off-balance yet perfectly balanced – and willing, too, to be a bit of a trouble-maker. If I had to choose a single poem . . . well, maybe, ‘Living Here’, a description of New Zealand which is mischievous and ruthlessly accurate, full of the ‘fierce calling’ that will mark much of Cilla’s work over the next decades – and of course about a million miles away from the place that NZ Inc, with its brands and logos, is so busy marketing to the world at large.

Many thanks to Brian, Michele, Ian, Emma and Bill. You can find out more about Cilla McQueen here. You can read and listen to work both by and about Cilla at the New Zealand Electronic Poetry Centre, including both text and audio versions of Michele Leggot's choice, 'Kitchen Table'.