Launch of Every now and then I have another child 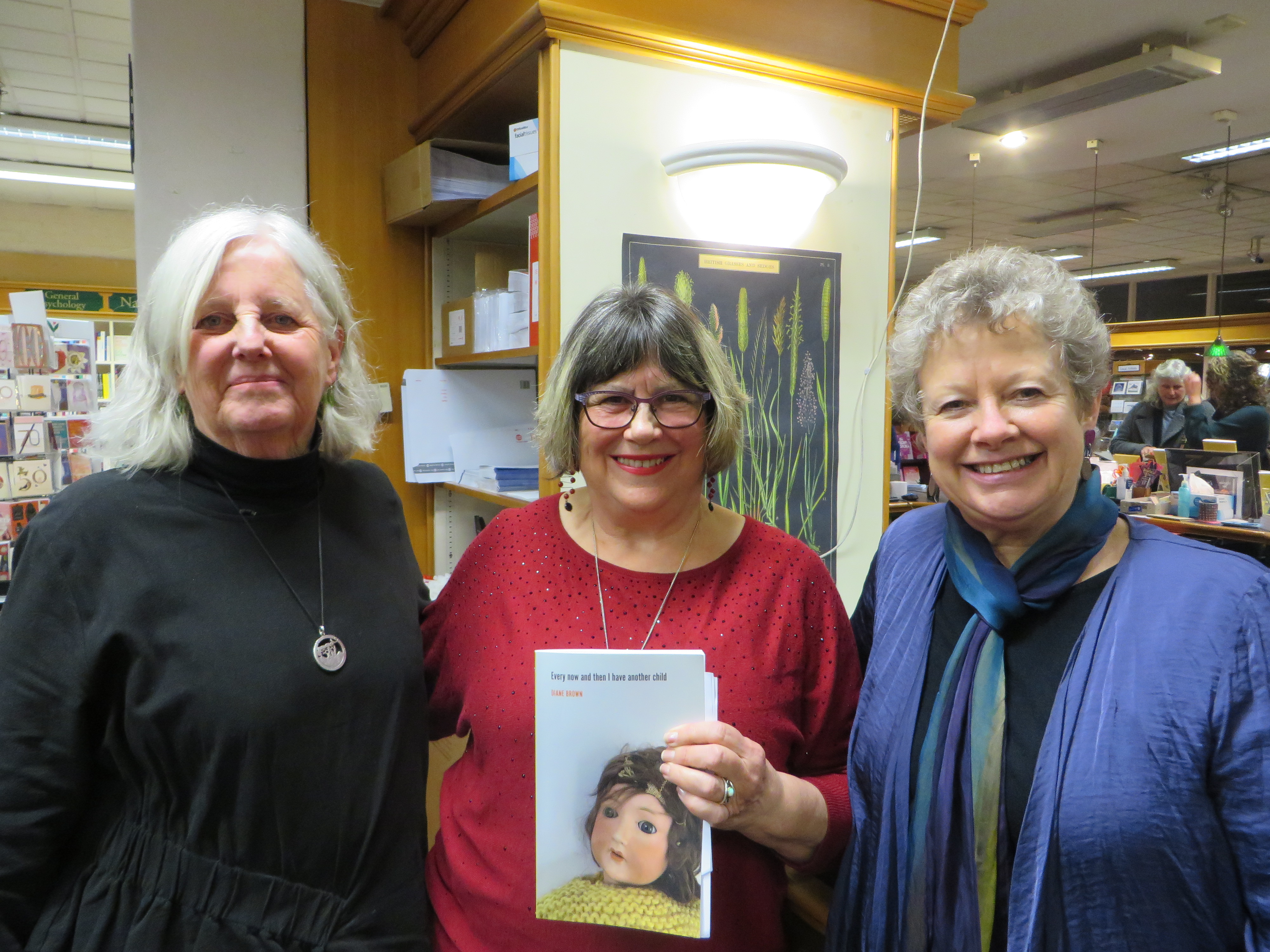 Last night saw the launch of author Diane Brown's Every now and then I have another child, which was released in May but had to wait for its first proper outing due to lockdown restrictions.

Fellow author Fiona Farrell (pictured from left with Diane and OUP publisher Rachel Scott) launched the book to a supportive, lively crowd at the University Bookshop in Dunedin. Here are her words about the author and her new baby.

Fiona Farrell on Every now and then I have another child

Sometimes when you read a book by someone you know, you can seriously go off them. You read with a growing suspicion, even if the work is neither autobiographical nor confessional, that perhaps you don’t like this person nor their work, and you never quite get over that.

And sometimes when you read a book by someone you know, it’s the exact opposite. You experience a gathering admiration and affection for them both as a writer and as a person. And you lay the book aside at last with a kind of amazement at their sheer talent, and how much you like their work, and how much you like them, the person who made the work.

This is that kind of book: Diane Brown’s latest work, Every now and then I have another child.

It hasn’t been especially fashionable over the past half century to identify books with their makers. There has been a lot of academic pin-dancing around the notion that books exist independently of their writers. ‘The author is fictive.’ It’s nonsense of course. Even the most theoretical text is suffused with the personality of its maker. What we write is an expression of the self, every bit as much as the way we talk to our kids, or walk along a street or make love or decide to buy an avocado.

This is Diane’s book. 161 pages, 9 sections, each with about a dozen poems which are also kinds of fractured fiction. It begins with a prologue, it ends with an epilogue.

She calls it a ‘poetic narrative’: a hybrid, part poetry, part story. There are the elements we associate with poems: the layout of the text, for example, the shortened line, a sense of rhythm, of intonation, a deliberate musicality to the language, a pervasive sense of metaphor, that individual words are dense with meaning and association.

There are also elements we think of as narrative, or rather several intersecting narratives, telling a story, or rather several intersecting stories. There’s a sequence of events, the sense of gathering discovery that is at the heart of story telling. There is a cast of characters whom we come to recognize and sometimes hear speaking for themselves in the first person: there is the central figure, Joanna, who is a writer and a tutor to other writers, there’s a baby, a clinging dependent baby, there is Anna Cass, Joanna’s fiercely critical, sinister and persistent doppelganger, there’s a mother who has disappeared mysteriously, there are a couple of evasive grownup sons, there’s a murder or two, there’s Lesley the victim and Detective Dave, there’s a crime investigation.

The writing is teasing and quick moving between genre and register, and it is always very well aware of what it is up to. This is metafiction, and it knows it, says so explicitly in one poem about a murderous dream. This is the work of someone who is very well-read, very informed, very literate. Everywhere in this book there is the evidence of a well-stocked, original, inventive mind.

The intelligence is formidable, but there’s more to it than that. There’s also a deep personal warmth to this book, a kind of openness and generosity, which is something I think of as one of Diane’s great qualities.

Her book is fundamentally about loss. A profound sense of loss. It’s about the effort to love and be loved in return. It’s about the search for meaning in a random universe. It feels like a work for our time, for this era, spot on in its depiction of loss, confusion and the pain of being human and aware. But it is done with such a light and sure hand, such a sense of irony and the absurd. This is writing miles away from the dreary poetic confessional, or yet another predictable boomer memoire. If there is autobiography here – and there is – ‘we write ourselves’, as I said earlier – it has been fashioned and reinvented and made into art. It’s funny, wry, self-mocking. The title sets the tone: Every now and then I have another child. That’s the way of this narrative: deadpan, throwaway, and unsettling, with a dreamlike psychological embedded truth. And that too I think of as Diane: smart, empathetic, generous, but also bloody funny.

And finally, I should say here this evening in this company that this is a book that will be read and appreciated well beyond the bounds of this city, but its roots are here. Its landscape will be familiar to you all: the way you can see an old villa across a gully – not something you can do in every city in New Zealand – or sunrise across a harbour. There are references only locals will catch – to a housing co-op under construction, for example – and a mini-library, and a mural of a little boy catching clouds in a net.

And this aspect of the book too is expressive of Diane who was not raised here but is so deeply and generously involved in the literary life of this city.

It’s a wonderful book that will repay close study. It’s been beautifully designed and presented, another great title from Otago University Press. It’s being sold here in this wonderful bookstore, one of the best in the country, with staff who read and know their books. And it is a work by the brilliant, clever, warm, generous, funny, Dunedin writer, Diane Brown.

For more about Every now and then I have another child go to: https://www.otago.ac.nz/press/books/otago735965.html