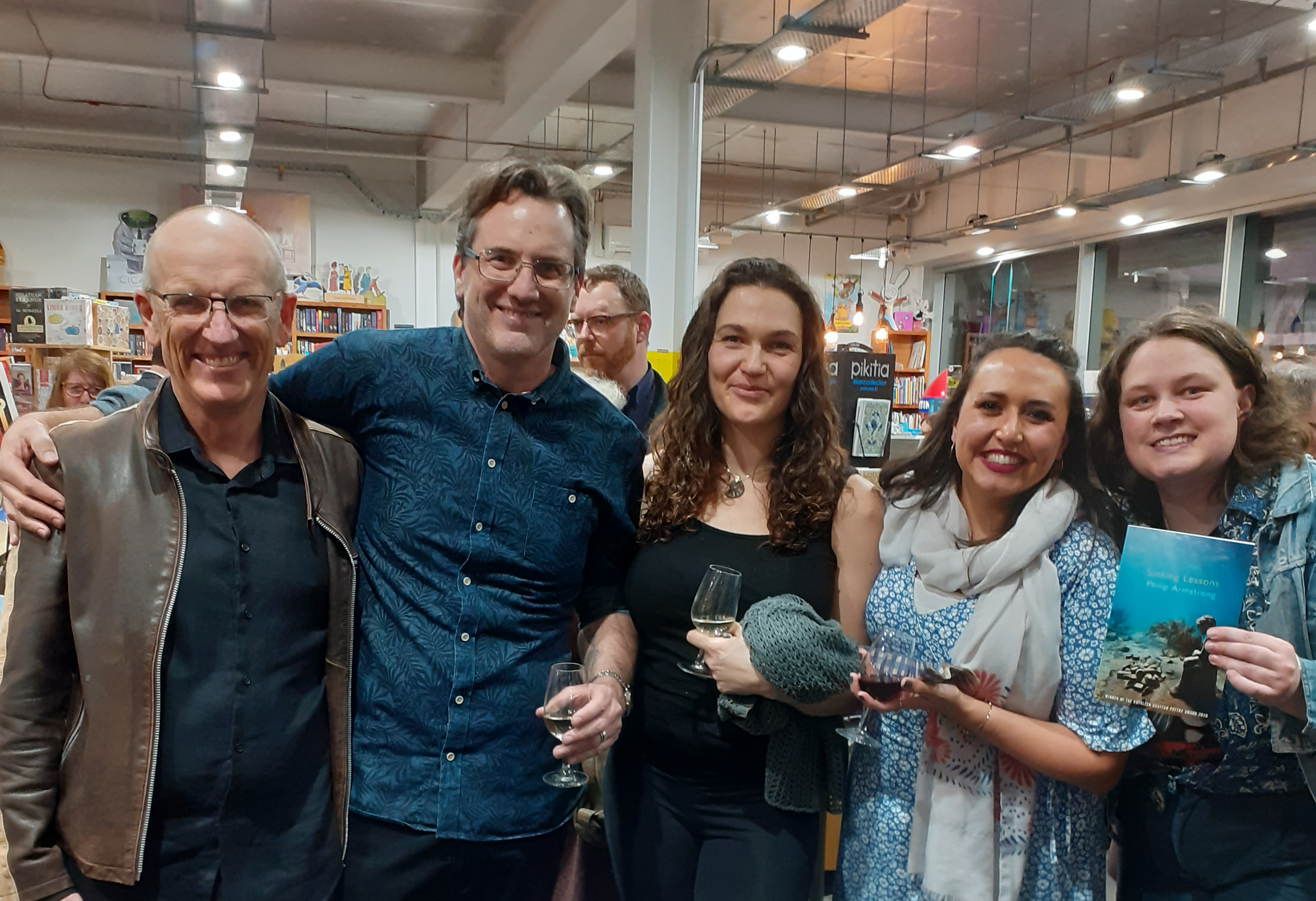 Sinking Lessons is the first collection of poetry from Armstrong, who was the winner of the 2019 Kathleen Grattan Poetry Award. It was launched by 2020 Robert Burns Fellow John Newton, pictured here (left) with Armstrong and his supporters. Here are his words from the launch.

It’s nice to be back in Christchurch, and it’s an absolute delight to be invited to launch this book by my friend Philip Armstrong.

The first thing I’d like to do is read you one of Philip’s poems. It’s called:

‘In the Infinity Pool’

The architects from the Las Vegas Sands
modelled their resort in Singapore
on three pairs of playing cards
steepled like hands
and one more balanced on top.

On one side of the punt that floats
fifty-two floors above the city Raffles made,
a brimming pool flows edgelessly
into the sweating upper airs.

Dry-haired guests line up, chest-deep,
elbows on the horizon,
holding their devices out on sticks

the way Hans Holbein might
have held his brush out squinting
as he stood before the king.

Elizabeth Smither would be proud of that poem. The conceit – the metaphor – is perfect. By which, I mean:

(1) the comparison is genuinely funny

(2) that it makes a significant point (about contemporary narcissism) . . . when we take our selfies we are standing before the King.

(3) And most importantly – that you can’t really tell the joke any other way. You can spell out the elements, but the effect isn’t nearly as persuasive or as satisfying. It’s the kind of thought that can only really happen in a poem. The kind of effect you only get when someone is THINKING AS A POET.

Which stands to reason, because having got to know this book I can tell you that Philip Armstrong really is a poet.

Now, I put it that way because Philip’s situation with this book is a bit unusual. Strictly speaking, it’s a ‘first book’. But its author – if he’ll forgive me -- is no longer in the first flush of youth. ‘Youth-adjacent’, certainly, but he’s also a Professor of Literary Studies – some of you I’m sure will have been taught by him – and he’s the author of some half a dozen works of literary and cultural theory.

So what we have here is a master of one discourse setting out again as a debutant in another. And it doesn’t take much imagination to understand that this brings pressure. To start out again in a completely different genre leaves you exposed. Especially if, like Philip, you’re serious about it.

If I were to turn around now and play you a cowboy song on the guitar (don’t worry, I’m not going to . . . but I have been known to, and if I did . . .) I would perform it in such a way that you knew I wasn’t being entirely straight about it.
I’d perform like a hobbyist, a weekend warrior. I’d make sure there was an evident distance between myself in a bolo tie pretending to be Conway Twitty, and my professional self standing here talking to you about literature.

But that’s not the way Philip operates as a poet. Now in a few minutes he’ll stand up here and he’ll be modest and self-deprecating and charming, and you might think he’s laughing the whole thing off. But don’t let him fool you. Because that’s not what he’s actually doing on the page.

So if you know Philip, the scholar, the teacher, the critical theorist – Professor Armstrong let’s call him – then what about Philip the poet: do they speak in the same voice?

Strangely enough – though it follows from what I’ve just been saying – the answer is a qualified YES.

At a first glance, not so much.

Because while the poems are smart, they’re don’t wear their intellectualism on the surface. There’s the odd thing here you might want to Google – and you probably will if you’re reading carefully – but the overall feeling is light, playful, witty, conversational. The first impression’s inviting. The poems are fun.

But, they’re also serious. And this is where we come to the YES part of the answer (yes, this is Professor Armstrong). If you’ve read your Freud, and your Rosi Braidotti, and your Bruno Latour, then you’ll find them here, under the surface. It’s not in your face – it’s been absorbed into the conversational texture – but the theoretical framework’s there, informing the way that the poems see things.

More obviously, though – and this is on the surface – is the question of the poems’ favourite themes.

Roughly I’d say there are four kinds of poems here.

There are poems like the one I read before – poems based on incidents and observations: travel poems, domestic poems. ‘Occasional’ poems, if you like.

Then there’s a network of family poems, about memories of childhood, and particularly about parents. We all know what the ‘other’ Philip (Philip Larkin) said about parents, and Philip (our Philip) has a Mum and Dad too. In a certain way they’re the kind of poems you expect in a ‘first’ book. But there’s an advantage to saving up that autobiographical stuff until you’re a grown adult. So the family poems aren’t mushy and sentimental. But they’re not sentimental in the confessive, cod-Freudian sense, either: they don’t look for easy answers, they don’t blame. They’re searching poems, but they’re nuanced, and tolerant. Specifically I’ll mention just one of them: the very last poem in the book is an elegy for Philip’s mother, and it’s a real stunner.

Thirdly, there’s just one piece that I’d call a ‘postcolonial’ poem. Only one, but it’s biggie.

Orpheus is the archetypal poet. But his name was also given to a British Man of War which wrecked at the entrance to Manukau Harbour in 1863, on its way to reinforce Governor Gray’s war in the Waikato. 189 people died – New Zealand worst maritime disaster – which is all very historically ‘poignant’ . . . especially by the time Philip’s dealt to it in a terrific poem, or sequence, called ‘Song of the Orpheus’.

And finally, fourthly, most importantly, there are poems about animals, about relations between species, and about the ecological and climatic disasters that are unfolding around us – which is one of the things referenced by the title and the cover.

The outstanding poem in this group (and I’d say that along with ‘Song of the Orpheus’ it’s the other main pillar of the book), is the suite of poems called ‘Creature Effects’. The creature, specifically, is Frankenstein’s ‘monster’. You may recall that at the end of Mary Shelley’s novel, they’re up in the Arctic and the monster says he wants to die and he does a kind of Captain Oates and that’s the last we see of him.

In Philip’s version he falls into a glacier and his body gets preserved in (quote) the ‘so-called permafrost’. But this being a climate emergency poem, the permafrost melts and the creature gets reanimated:

I lay between white sheets of ice and sky
and felt my tissues liquefy:
a bag of mince defrosting on the bench . . .

And the story goes on from there.

As does OUR story. And that’s really what I’m trying to say.

The issues at the core of this book are also the issues at the core of Philip’s work as a thinker and a teacher, when he’s out there at the university being Dr Phil. And that, most of all, is what I mean when I say that he’s serious about this: he’s not taking time out; he’s not dressing up in silly clothes on the weekend; he’s doing his real work, in a different medium.

And because he’s an ethically-minded person, that ‘real work’ is not trivial. The things that he works on as an academic are the most urgent things, for himself, and for most of us.

Charles Brasch once wrote: ‘If you would sing you must become news.’
And as a literary historian I couldn’t agree more. By which I mean: if you want people to listen to you, you have to get in tune with what’s happening in the culture around you.

And the poems you’ll read in Sinking Lessons are news in precisely that ethical sense. What Philip’s trying to do as he shifts between prose and poetry is find a way to write about that matter most right at this moment. He’s trying to find a way to talk about the things that all know we have to be able to talk about.

That’s why I’m telling you: Philip is a poet to take seriously. We’re short of good critics in this country at the moment. Or maybe we’re just short of critical outlets. Either way, it’s as difficult to talk about the future of local writing as it is about any other future. That said, however, whatever discourse we do manage to sustain in the next decade or two – whatever kind of discussion goes about the most urgent directions in poetry – I would suggest there’s a very good chance that Philip Armstrong’s poems are going to be part of it.