Launch: Map for the Heart by Jillian Sullivan 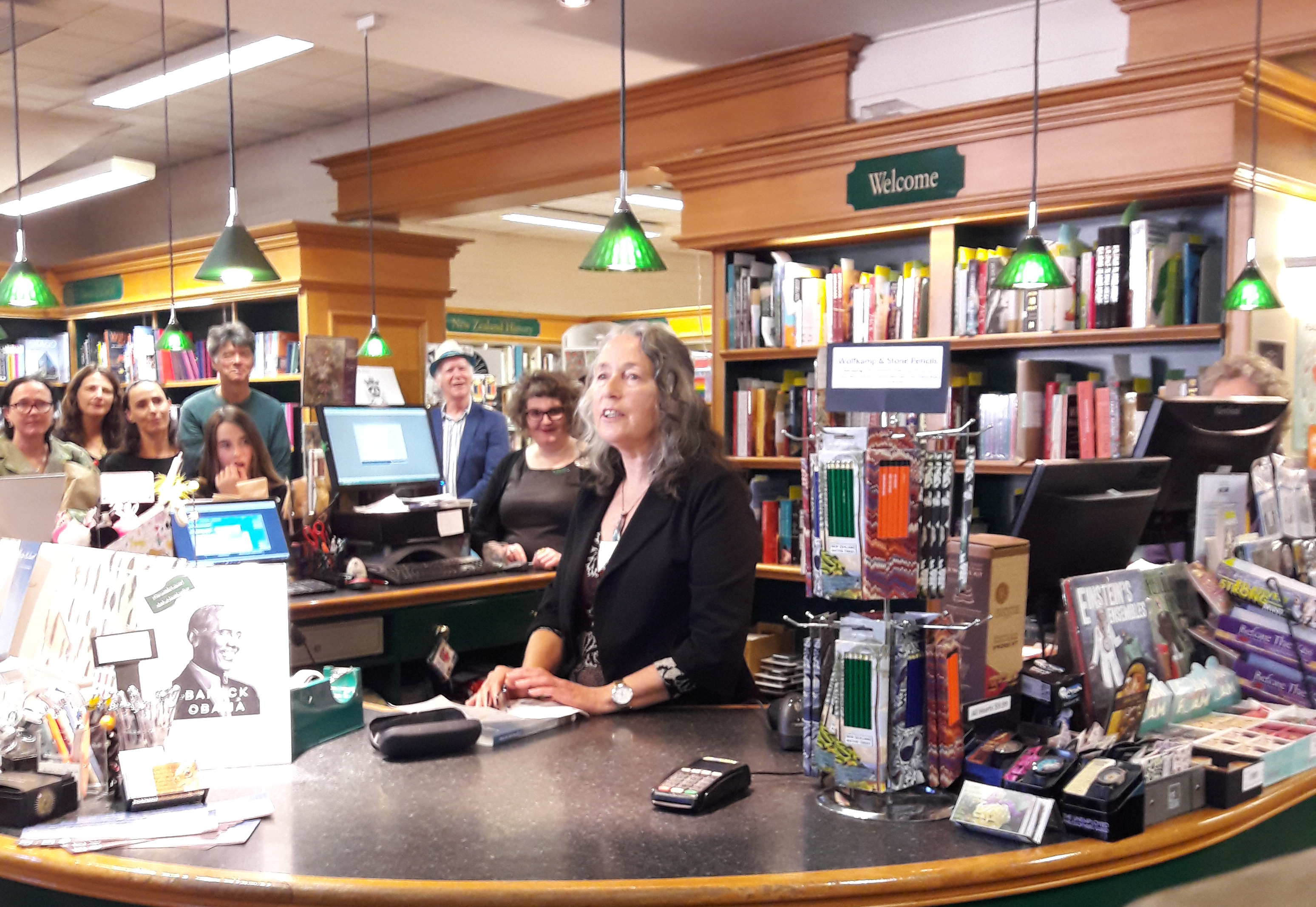 Jillian Sullivan's wonderful Map for the heart: Ida Valley essays is now out and we were delighted to launch it at UBS last week.

The event was attended by Jillian's friends, family and community and the book was launched by Mike Riddell, whose speech you can read below. 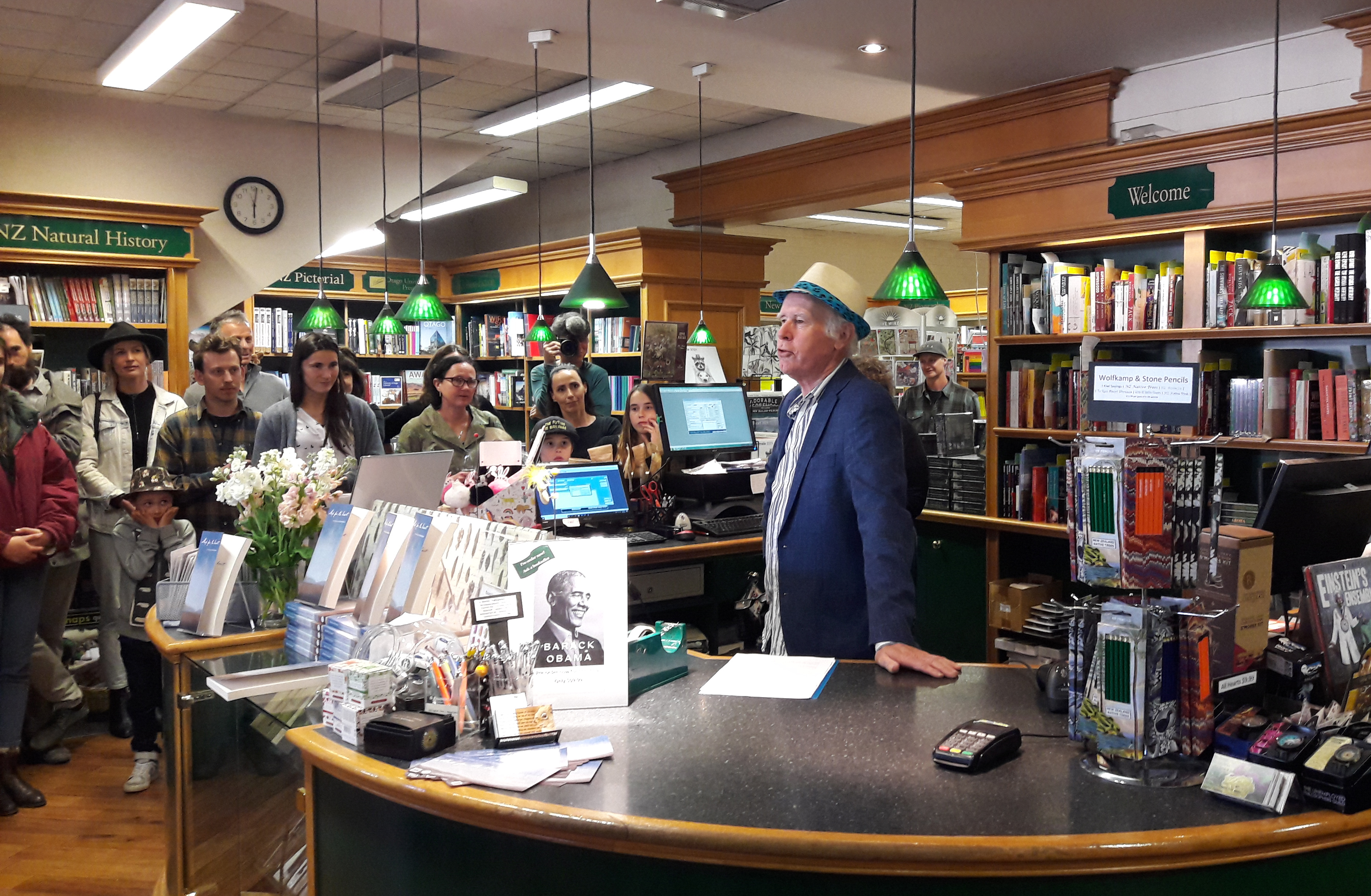 Map for the Heart launch speech by Mike Riddell

The University Bookshop! Otago University Press! How marvellous it is in these times to be in a university city – a City of Literature no less. Some part of the world has at least retained a sense of what is significant.

Two years ago Rosemary and I came to Central Otago for a month’s holiday staying in Jillian’s strawbale house. We arrived earlier than we should have, to find some old bloke pretending to vacuum the floor. It was Brian Turner. Jillian was putting sheets on the bed.

We eventually got settled in, and were soon joined by our daughter Polly and her dog Lola (both turn up in the last essay of the book). Only people who have stayed in that Ida Valley strawbale will know the embracing peace of it – the sense that you are encompassed in a safe womb.

But the next morning, I woke to discover a blackboard leaning against the wall, on which Jillian had scribbled her agenda for the month of January. At the top of the list it said ‘Climb the Hawkduns’. For a while I thought she’d put it there to intimidate us. But that was before I really knew Jillian. She wrote it because that was one of the many things she wanted to do, and what’s more, she did it!

It was a while before we knew her well enough to understand the power of her will and the extent of her commitment. She was writing a book of essays, and if that required climbing a bloody mountain, then it was one small step for womanhood. And not just one mountain, as you’ll discover when you buy the book.

Jillian is one of those increasingly rare creatures – an ethical writer. She speaks and lives the words that are committed to the page. Her incisive writing reminds us that being human comes with the call to responsibility for our actions, our relationships, our treatment of the land and all that has life. When I read this new volume of work, I feel like being a better person.

As you know, the title of this collection that we’re here to celebrate tonight is Map for the Heart. Jillian does nothing that is unconsidered, and so I knew she’d chosen that title. It is a map – a series of markers and symbols that represent something else. Scrawlings on paper by which one might plan a journey, get a sense of a continent, explore a path or pursue a destination.

A map for the heart. A voyage of interiority. Some of you might know Janet Frame’s story ‘You Are Now Entering the Human Heart’. Like Jillian’s essays, that too was a play on the ambiguity of the word ‘heart’ – at once central to bloodflow and life, but much much more than that. What we are called to is the centre of our existence – embodied, vital, spiritual. How to make sense of this world in which we find ourselves.

The subtitle: Ida Valley Essays. Jillian’s essays are not all about the Ida Valley. But they are rooted there, in her life in that particular geographical and metaphysical landscape. The Ida Valley – what rich resonances the name conjours, and how much more it is to those for whom it is tūrangawaewae.

How do you know (writes Jillian)
which hills and sky and water
wiil be your home
The place where you long to return?
...
How do you choose
which rocks and trees and soil
will be your own?

This is the work that answers that question, not only for her, but for those who find themselves rootless and unformed in a strange time. This is a collection about the longing for home.

The essay is the perfect vehicle for our age, even though its roots are well established in literary history. And there are few in that history that have had an instinctive feel for the form better than Jillian. She entices us, challenges us, inspires us all in a few paragraphs, only to pull us back from esoteric longings to the form and solidity of the landscape, the grieving, the loss that rakes us in the dim recesses of the psyche.

She is dextrous – a storyteller, a dream weaver, a realist, an enviromentalist, a mother and grandmother, a wise woman. There is nothing finer than to read a writer completely on top of their game. As such she stands in the company of Emerson, of Thoreau, of Susan Sontag, of May Sarton, of Wendell Berry, of Joan Didion. It really is that good.

Jillian writes of vernacular architecture with a great deal of passion – the work of building out of basic materials that are close at hand. It might be a metaphor for her writing, except that she’s actually raised a house on her own land that is beautifully solid and tangible. In the process (which you can read about here) she’s got her hands deep in mud, water, straw, cowshit and lime. And made from it something soaring, substantial, embracing, enchanting.

And that’s how she writes. Getting her hands dirty. She reminds us that the local is universal. To drill down into detail, into place, into the personal, is to create harmonics that cause sympathetic feelings to ring in all of us. Jillian’s writing is achingly precise. There’s not a noun or a verb out of place. She teaches that, she writes that, she demonstrates that. James K. Baxter said that Frank Sargeson wrote like diamond on glass. Jillian’s vocabulary is all diamonds.

The bass notes of this collection speak to us of courage. The bravery of a woman springing from small and inauspicious surroundings, building huts above the Tasman snowline, leaving relationships when it was time to go, raising her children in a tent or a car, believing always that there is a way through, a way ahead. Doing it in hope rather than regret.

“If what we do is not examined with a close eye,” she writes, “it becomes the dark well we draw on unintentionally; becomes the hard hand, the tears in cars, becomes the prison walls... Even if we don’t know what our needs are, we know what they are not: exhaustion, frustration, sadness, despair. It is to sing we were made, not to endure.”

When you read this work, you will begin to sing – or at least your heart will. Jillian’s mother had her comeback on a small gossipy town by teaching the children of her detractors to sing. Jillian has instilled music in the souls of her own children and grandchildren. Her writing will swell within you like a angelic choir. I defy you to regret buying this book – not only for yourself, but for your friends.

It really is that good. We need to take this opportunity to lift a gifted writer like Jillian on our shoulders and salute her. Map for the Heart is that rare creature – a fiercely grounded book springing from the ‘middle of nowhere’ that speaks to the ache in the heart of the entire world. Let us make it known. Let us attempt to plot a chart from its themes. Let us buy every damn copy and spread it abroad.