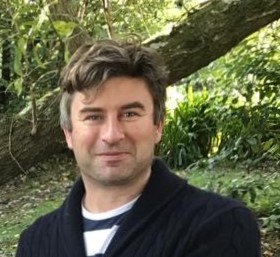 The Landfall Essay Competition 2020 has been won by A.M. McKinnon (pictured), with an essay titled ‘Canterbury Gothic’.

Competition judge Emma Neale describes it as ‘an excellent example of a personal narrative neatly interlocked with a narrative of wider social themes’.

There were 85 entries in this year’s competition, described by Neale as a bumper crop.

A.M. McKinnon grew up in Christchurch and overseas and now lives in Wellington with his family, including a three-year-old who helps him type. He has attended a number of writing courses through Victoria University of Wellington under Diane Comer and Anna Jaquiery. The publication of his winning essay in Landfall 240 next month will be the first time any of his creative writing has appeared in print. He is delighted to have won the competition.

‘I’m thrilled – and astonished – to have been selected. I was excited just to participate in the competition but to now be a tiny part of the Landfall tradition is an absolute honour. I’m incredibly happy.’

Second place was awarded to Tan Tuck Ming for an essay titled ‘My Grandmother Glitches the Machine’, and third equal were Anna Blair (‘Notes Toward a Subjective History of Honey’ and Siobhan Harvey (‘Living in the Haunted House of the Past’).

Authors of top-ranked essays will be invited to feature in Strong Words 2: The best of the Landfall Essay Competition, to be published by Otago University Press in 2021