Launch: Bus Stops on the Moon 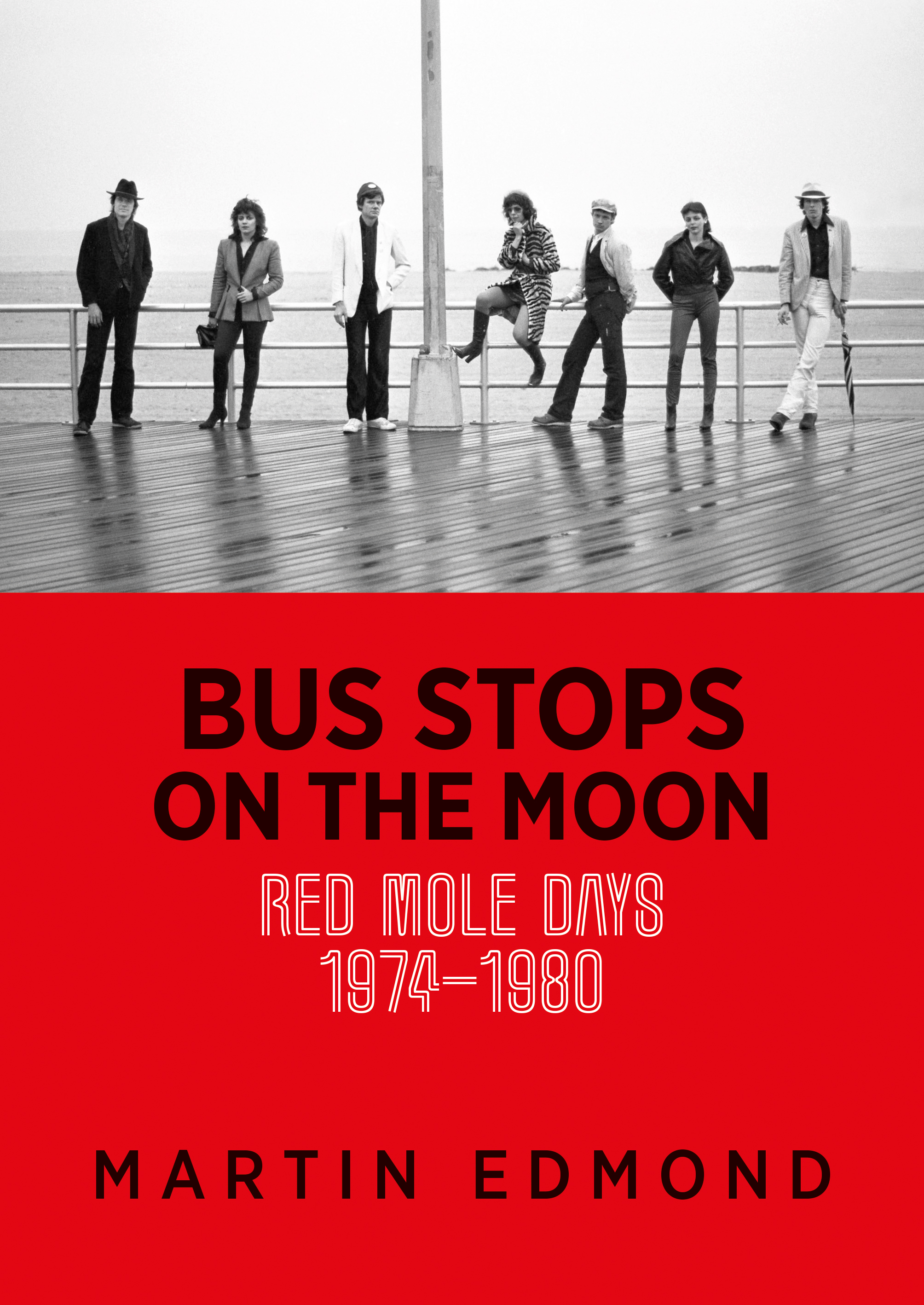 The book was launched by Nick Bollinger (pictured below on the right with musician Bill Lake) and featured performances by John G. Davies; The Republicans (Brian Potiki and Jill Walker); and Jean McAllister and Tony McMaster. 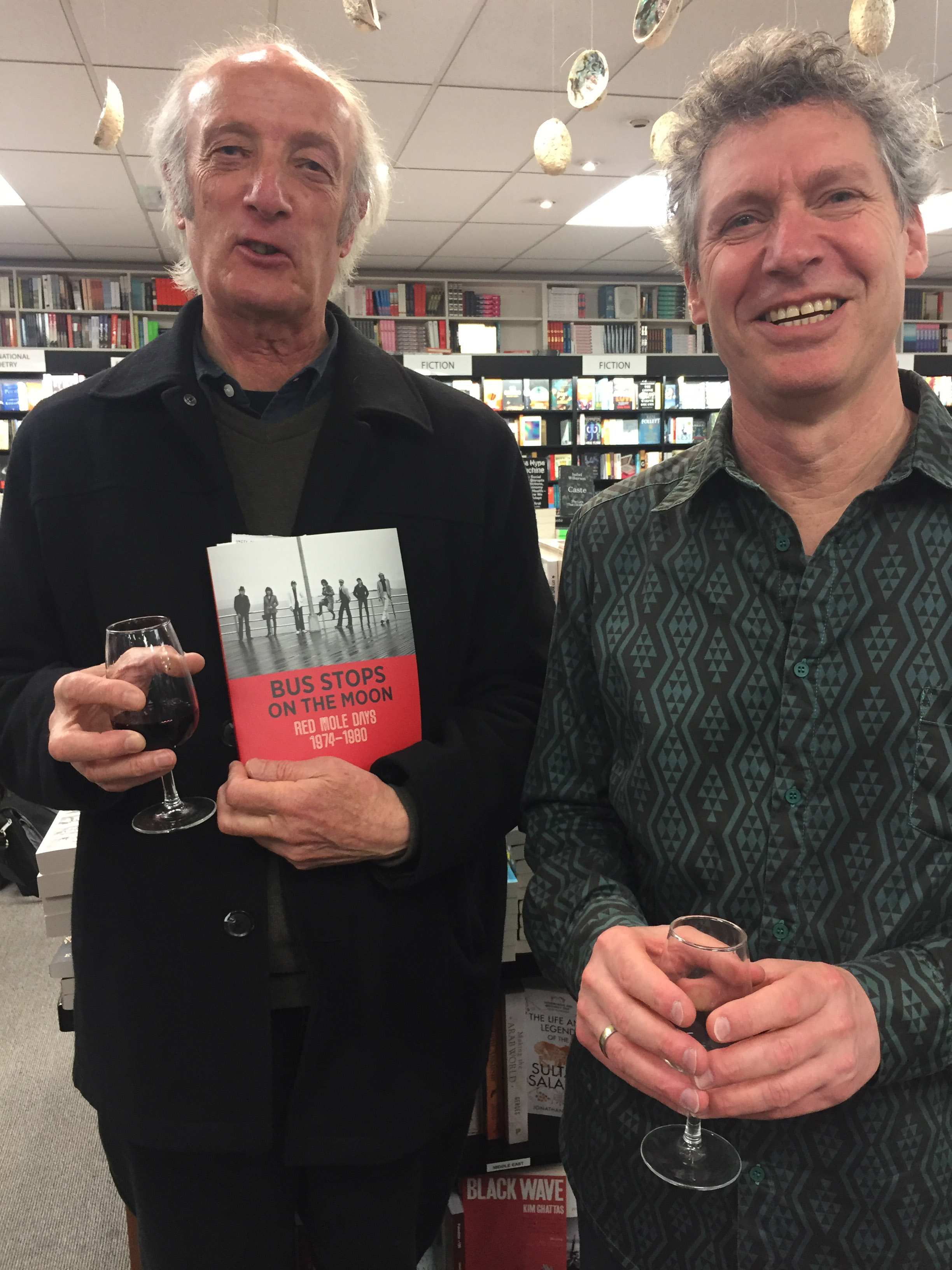 It’s an honour to be asked to launch the new book by Martin Edmond.

Whether an imaginative account of Colin McCahon’s lost wanderings in Sydney, or his own ramblings around Kawau Island on LSD contemplating George Grey, his writing has never failed to show me something about New Zealand in a way I had never seen it before. And Bus Stops On The Moon, is no exception.

But the subject of this book has a personal resonance for me. As a teenager in the mid to late 70s I saw Red Mole perform in this city numerous times and those were formative and unforgettable experiences. And, like Martin’s writing, Red Mole made me see this place where I live, in a different way.

Four or five years ago, in an attempt to shed some light on a period of this country’s cultural history - a period which almost exactly corresponds with the years covered in Bus Stops On The Moon - I wrote a book in which I forced myself to recall and re-examine my own years as a musician travelling around New Zealand.

But when it comes to tales of drugs, sex and rock’n’roll - not to mention guns, strippers, Latin American fugitives and ruthless Yankee show-biz hustlers - Martin’s book wins hands down. His is a story that seriously rocks and rolls.

Rather than living the rock’n’roll dream, our band had a daydream, bordering on a nightmare, that we might be able to make a living as working musicians on the New Zealand pub circuit. But Red Mole were guided by something more elevated than that; something that didn’t depend for its fulfilment on the manufacturers of Steinlager. Theirs wasn’t a dream. It was a vision; the kind of vision one could perhaps only have ‘in an opium den behind a Shell service station’ in Laos, which is the location to which Martin traces Red Mole’s ‘originary moment’. It was a vision of the world, a way of living in it, reflecting it and challenging it. A vision that Red Mole’s founders and two constant members, the couple Alan Brunton and Sally Rodwell, remained true to from that moment in 74 until Alan Brunton’s death in 2002, and ultimately Sally’s death four years later.

Martin’s book covers in detail six of those years: the first six, during which Martin was part of the troupe, in various roles including actor, songwriter, lighting operator and driver. But in focusing on that brief period, and with his unique perceptions and revelations, he has written a book that explains, better than anyone else ever could, what Red Mole was.

So what was Red Mole? I couldn’t paraphrase it as it’s way too tangled and complex, and of course it’s the reason for reading the book, which I know you are all going to do. But Martin does say that Red Mole was ‘first and foremost a lovers pact…’ and that when you joined Red Mole, you were joining was ‘a lifelong conspiracy that was also a love affair.’

He refers to a manifesto dating from that originary moment in which Alan and Sally outlined five main principles, the first of which was: ‘To keep the romance alive’.

As a member of the audience it was impossible not to catch some of that romance. Like a lot of people, my first Red Mole experience was their Cabaret Capital Strut, some time in the first part of 1977 at Carmen’s balcony, in Wellington. I was eighteen, I had never set foot in a strip club before.

It was like stepping into an underworld within an underworld; from the great Carmen and her entourage, who were very much a presence and whose guests we clearly were, to the performers on stage, some of whom were obviously in character; others less obviously, like the Mt Crawford finishing school graduate Neville Purvis. Later I would meet Arthur Baysting, Neville’s creator, but at this point I could only imagine that this figure in the dirty white suit, pencil moustache and mirror shades really had come from the local prison. It was true cabaret; some of it hilarious, some of it dark; much of it obviously political - this was the era of Rob Muldoon and one of the recurring characters onstage wore the mask of a pig. Much of it was metaphysical, mysterious and poetic.

Martin admits to having been, occasionally, as baffled by Red Mole as their audience. He recalls the poet Brunton, who wrote most of the material and came up with the overarching concepts, announcing that everything he wrote contained 77 layers of meaning. He may have been joking, but maybe not entirely.

After Carmen’s, Red Mole would go on to create even bigger events on bigger stages, which were in many ways even more mind-blowing, yet those cabarets at The Balcony were a high-point in terms of Red Mole’s connection to a community. Within six months they went from performing on Sunday nights to playing every single night of the week. And then, right at the point when there were queues around the block, for every show, they suddenly stopped.

Martin recalls asking Alan Brunton why. He answered that he was sick of cleaning the toilets. But one gets the feeling that that wasn’t the real reason. Staying for any length of time in any one place, doing the same thing, particularly once it was established, was not only not the plan but somehow anathema to Red Mole.

Their role wasn’t just to entertain. They were outsiders by nature and by design. That was the function of their art. The folk singer Woody Guthrie said he saw his job as being to comfort disturbed people and disturb comfortable people, and Red Mole, in their own way, seemed to me to embody that principle.

There are places in the book where Martin reveals records of budgets and earnings, and these always seem ridiculously meagre. Money was scarce, and yet the absence of money or arts council grants never seemed to stop them from moving on to the next city or country, mounting the next show.

He writes that ‘money was a different thing then’ and perhaps that was part of it; that in the 70s, before Rogernomics and neo-liberalism and user-pays and trickle-down theory, it was easier for people to take risks. Still, Red Mole seemed prepared to risk more than most. In fact they would risk everything; they lived, as they performed, without a safety net. That was the sort of commitment that was required to make the kind of work that they made.

And they made a huge amount of work. One thing that astonishes me reading Bus Stops On The Moon is just how much they produced in this six-year period. As Martin goes through every show in fascinating detail he not only uncovers the layers within the scripts, but also details the processes that produced the masks and props and sets, not to mention publications like the literary magazine Spleen which they were involved with on the side.

After Carmen’s they left Wellington for Auckland, but didn’t stay there long. Within a few months they had departed once again, this time for America, which as the 70s turned into the 80s, seemed like it was warming up for Armageddon (even then). In some ways this is the scariest, most hair-raising part of the book. It’s where Israeli commandos, armed police and dodgy drug dealers come into the story.

It’s also where Martin, in the personal growth story that is interwoven with the history, becomes the writer he wants to be, not by his contributions to Red Mole but rather by writing, on commission, pornographic novellas, which help pay the bills while the group is living below the breadline in New York. He also mentions a prose poem from the period, unpublished, in which, looking back, he can see that there he had found his voice.

There’s another story he tells quite early in this book, in which Alan Brunton appears to have arranged the members of Red Mole in a circle and is identifying in turn what each person’s contribution will be. When he comes to Martin he says: ‘Martin is … the critic’. Martin was offended, but looking back says he hopes he can now claim the title historian instead, though he listens out for Brunton’s ‘ghostly riposte’.

But in fact it is Martin’s critical mind that, in combination with his love and mastery of language, his extraordinary memory, and acute sense of what actually matters, makes this book the best kind of history. I won’t recap any more of it; I’ll leave it to you to luxuriate in the writing and telling of this sometimes hilarious, sometimes heartbreaking, often hair-raising, inspiring and incredibly New Zealand story.