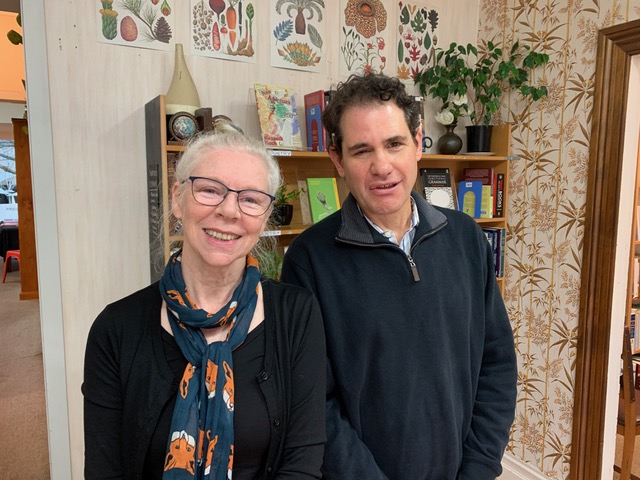 Brass Band to Follow, by Bryan Walpert, was launched at The Open Book in Ponsonby recently. We are delighted that Anne Kennedy was able to launch Bryan's collection and that she has allowed us to share her speech here.

I’ve had a wonderful time over the last couple of weeks reading Brass Band and am looking forward to discussing it. But first, I’d like to talk for a couple of minutes about Bryan’s work and writing in general, his place in letters in Aotearoa and the world. Because Bryan (who is Professor Walpert) isn’t a skite, and I think even some people here today might not know the breadth and depth of his published work, from journalism to creative non-fiction to criticism to poetry to fiction. I’m not going mention it all or we’d be here all afternoon, but some highlights from the last few years:

It seems like not long ago we were right here in the shop celebrating the publication of Late Sonata, Bryan’s gem-like novella about love, loss and the mind, which won the 2020 Seizure Viva La Novella Prize in Australia. There was a pianist here on that occasion. Clearly there’s a music thing going on - I’m sure the brass band is waiting out back for all the talk to be over. To continue with Bryan’s books: Poetry and Mindfulness: Interruption to a Journey, from Palgrave MacMillan New York; Native Bird, poetry, from Mākaro Press, Wellington; A History of Glass, poetry, from Austin University Press; Resistance to Science in Contemporary American Poetry, criticism, from Routledge; and Bryan has a novel coming out from Mākaro Press later this year. As well as a raft of work in journals and anthologies. This man is on a roll.

Unlike Bryan, I’m not above skiting, so I’m going to add that, a few years ago, when I was editor of Ika literary journal which came out of Manukau Intitute Technology (until they shut us down), we had the honour of publishing some of Bryan’s poems, including none other than the title poem of this book!

If I had to compare Bryan with other local poets, Ian Wedde comes to mind, for his mixture of concept and domesticity (more on that later) and James Brown for his humour and compassion. That’s just to say that Bryan isn’t his own little isolated boat, he’s part of the flotilla that is poetry. But he is also an original; there’s no one else sounds quite like him, or does quite what he’s doing with his poetry. 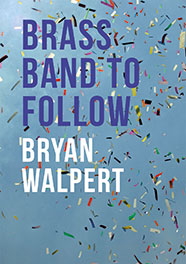 Now to the book itself. As I read Brass Band to Follow, and its moments started to gather, build, and talk to each other, the word gesture kept asserting itself for me - I think because these poems reach out, they connect, they use shape and sound to mihi to the reader. The language here is poignant, strong, funny, delicate – a whole vocabulary of gesture – to impart big, deep ideas that are subtle although profound, and I don’t use that word lightly.

Reading the gestures in this book sent me on a personal mission (and I think when a book sends you to a book, that’s a good sign), to another work that deals with gesture, A Gesture Life, by American novelist Chang-rae Lee, and I quote: ‘It seems to me that life's moments don't have to be so right anymore, so fraught and weighted, but just of themselves, what they are...”. That sentiment seems to me to fit with what Bryan is doing here. Brass Band repeatedly uses the sign, the word, the turn, the colloquial, the inventive, to show what is.

And that means, in the end, not flinching from talking about the big stuff, even if it might be in an everyday manner: Growing older, memory, domesticity, what are we doing here? Brass Band tells of these huge things with knowledge but also with particularity, intimacy, fun, moment by moment.

Language-wise, a Bryan Walpert poem code-switches so beautifully – it reflects the tumble of language, what it is to be alive. One minute we’re with the domestic musings of a father watching his daughter use an electric toothbrush, the next contemplating a scientific theory from the 17th century. The world is houses, gardens, pianos, ideas, feelings. The result is an excitingly rich text. But Bryan’s lyric, although it takes the everything into its maw, is deceptively simple, as it sneaks in idea, image, emotion.  The three constants of being in the world, thing, thought, feeling, are always there. Bryan plays them like an instrument to tell about ourselves.

In ‘Transporting’ – a glorious poem:

the short mahogany
bureau is cured of its gout
the La-Z-Boy of its
broken foot. My footprints
on the hardwood floors dance
as a younger man can.

If sound is part of this beauty, so also is humour. Humour humanizes, and Bryan never forgets this. To pluck just a couple of examples, ‘Tranquil’ starts off, ‘I’ll probably cut this line, / maybe this one, too, and the next…’ In ‘The Fantail’, an Eastertime poem, Bryan pokes fun at himself while lamenting the transitory nature of childhood: ‘… Eight and five, we don’t have / much time for them to think this / the generosity of a large / bunny…’. Later in the same poem, a fantail (a Walpert motif, by the way; see Native Bird) is ‘threatening to fly across the year of the yard.’

One of the enormous strengths of this book, that it has an arc. Although it might appear un-pin-downable, it takes you somewhere.

The first section, ‘Prompted’, opens us to the idea of the inevitability of change and consequence, and how we navigate that, or not: In the playfully code-Biblical, ‘Begin with’:

something simple, something near,
not too near, it has to be distant,
or you have to be distant enough from it
to see it coolly, like the moon.

The second section has love poems. But these aren’t your common or garden love poems, these are real love poems - funny love poems, poems about love and science, love and home, love and how we exist in our bodies. Two sequences take on 17th century scientists – Robert Hooke, who worked on cells, and Robert Boyle, a pioneer of modern chemistry and the experiment. These marvellous poems entwine science with ideas of home, love, the domestic. ‘Micrographia’ sings off-beat odes to notions and things like ‘incongruity’, ‘a small needle’, ‘the pores of bodies’, ‘the razor’, ‘the full stop’. And in the wonderfully titled, ‘Experiments touching cold’, the cold light of scientific experimentation sits next to intense and delicate musings - the language of science juxtaposed with love. To give an idea (although each poem has a magnificent, uninterruptable thread):

… it had started
to hail, so I missed the last thing
she said, and to cover that lapse
I slid open the glass door
of the deck to hear the patter
against the boards, the softer
ticking against the trees…

Encased in all this is theme of the domestic, where love resides. It might be genderist of me to notice this, but I was struck by the tender domesticity of these poems, a topic which at one time was mostly the preserve of women poets, but times have changed, and these poems ring out as dwelling in the place where most things happen in out lives: at home.

The theme of domesticity is epitomised by a poem written for the wedding of friends, in which the romantic title ‘Drink to me only with thine eyes’ is bedfellows with the line, ‘Thou canst put thine own plate in the dishwasher’; and in which ‘death’ is rhymed with ‘breath’, signifying that us mortals only have a certain time here together, no matter how much in love. ‘Drink to me only’ is a daring, real wedding poem which deserves to have many outings.

The last section of the book, the eponymous ‘Brass Band to Follow’, knits together the themes of science, memory (‘The archaeological layers of the schoolyard’), aging, domesticity, yet extends them outward to something that cannot quite be contained. In one of the last poems, ‘The Value of a statistical Life’, the poet muses on the aching randomness that some immigrant children have been separated from their parents at the US border, while the poet, thanks to the immigrant journey of their great-grandparents, now sits in comfort while their children play Rubics cube and piano.

Among the slippery eliding of word and idea in this book, what we come to – or what I came to – is a central notion, which I hesitate to say, because it’s so wonderful to find as you read. But just a hint: what we want, we cannot get. This somewhat bleak sentiment, or stance, or condition, is presented in a way that makes the journey towards it all the more worthwhile. We cannot get what we want, but we must keep searching, and that search is love for family, love for community.

In the end, this poetry is not something separate from life, it is our experience of living, it is the gesture, is the poetry.

Thank you, Bryan, for giving us this marvellous book: The generosity of the large bunny. To you and your whanau, huge congratulations. I know that this book is going to be enjoyed by so many, and will have a long and important life in the world.