Parking spaces on the rise on the Dunedin campus 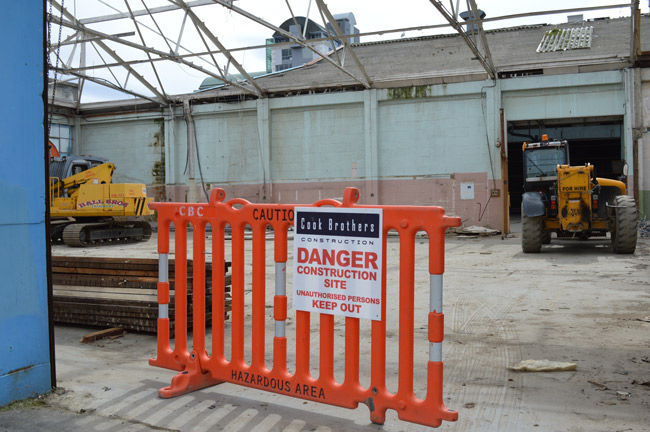 Roofing has been removed from a warehouse on Albany Street in preparation for its demolition and the creation of more car parks. The Commerce Building is visible in the background..

More University of Otago parking is being created on the Dunedin campus - on the former Wickliffe Press site - by demolishing some warehouses that have reached the end of their useful lives.

Otago bought the site bounded by Clyde, Albany and Forth Streets in 2008, to provide for future expansion of the campus.

Since then, the office block has been upgraded to house some Information Technology Services staff, the yard has added 85 car parks to the campus, and the warehouses have been used for storage.

Some of those warehouses - which are extensive and cover more than 7,000 square metres – had already deteriorated to the point where the buildings detracted from the campus environment.

Property Services Director Barry MacKay says repairing them by replacing roofing and upgrading the exterior would have involved major expenditure, so the University has decided the best interim measure is to demolish some of the warehouses to make way for a car park with 152 spaces.

The University has also decided to use the two most modern warehouses for general storage and recycling, which is mostly furniture some areas no longer need that is now available for use by other areas on the campus.

The University needs to increase the number of its car parks because about 300 are being lost temporarily or permanently through building projects.

Property Services has not been able to find alternative parks for about 100 people, so they will be offered spaces in the new car park.

The rest could be used for short-term, casual parking because there is a shortage of that type of parking on campus.

Mr MacKay says work on the site so far has focused on strengthening the two warehouses that are remaining on the site, so it is safe to demolish the other warehouses.

But simultaneously, the contractors have been carefully removing sheets of roofing which contain some asbestos from the warehouses that are going to be demolished, so the asbestos can be disposed of appropriately. The roofs on the two more modern warehouses do not contain asbestos.

When the roofing has been removed and the two warehouses strengthened, the real demolition work will begin, in two or three weeks’ time.

So far, the project is on track to be completed in late February next year.