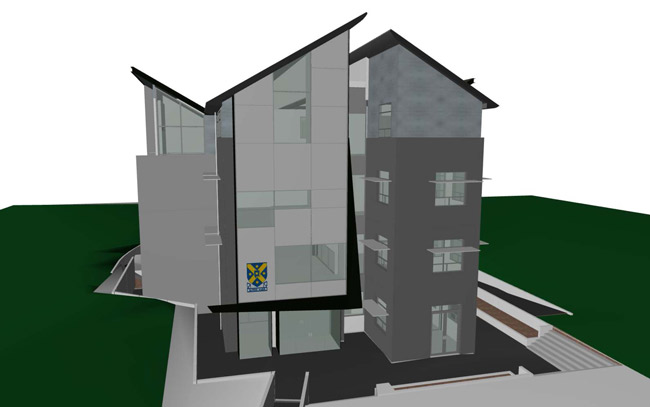 Work will begin on the University's St David 2 building in the next few weeks. The building is being redeveloped back into office accommodation after being gutted and seismically strengthened in 2015.

Work is about to start on the University of Otago St David 2 office building redevelopment.

Building Consent has been granted, and Cook Bros construction has won the tender to undertake the construction works.

The contractors will set up their work site to the side and rear of the Centre for Innovation building in the next week or so. Initial work will focus on dismantling mechanical equipment from the building’s plantroom.

The project is scheduled to finish in May 2018.

The St David 2 building, originally an office block, is on a long, narrow site located behind the Centre for Innovation on St David Street.

The building is currently unoccupied after the interior of the structure was gutted and seismically strengthened in 2015 to meet new building standards.

The four-level building is now being redeveloped back into office accommodation. The planned University Shared Services centre will occupy the first three levels, and Human Resources staff (currently in the Jamieson Building) will be located on Level 4.

As part of the $9.1 million re-vamp, the ground floor – Level 1 – will have a new front entrance, reception and circulation area. The rest of that floor and the other three floors will be filled with modern, open-plan offices with flexible break out or meeting areas. The exterior will also be completed, including painting and landscaping to tidy the area.

The project will bring a substantial existing University asset back to life, and help meet the demand for offices on the Dunedin campus.

It will help to consolidate office-based support services, providing the University with cost-effective, modern and efficient office accommodation designed to suit multiple tenants. It will provide more space for relocations for new building projects planned on campus in the next decade, and also potentially reduce the University’s use of leased premises.

This fulfils the Campus Master Plan’s vision for support services to be on the campus’s perimeter, but still connected to front-of-house student and academic functions. The project also aligns with the University’ strategic vision, which includes providing outstanding campus environments and sustaining capability by using resources efficiently.