Robots save on time and mess 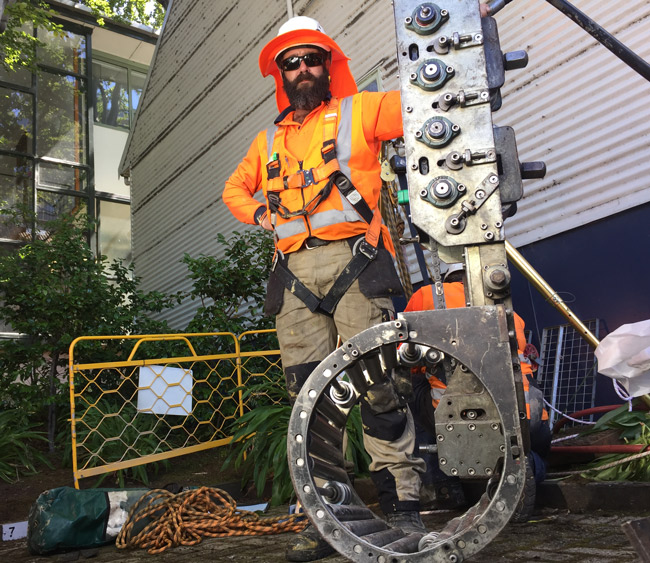 On a roll … An Interflow crew leader with part of a machine that rolls corrugated plastic into a continuous pipe. 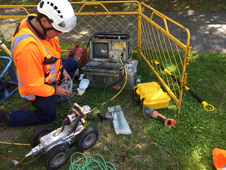 On camera … An Interflow crew leader with the controls for the robot with a camera mounted on top (front) and the screen its images can be watched on (rear).

Using two robots, a generator, an extractor fan, and a machine that winds plastic strip into a pipe has cut a six-week job on the Dunedin campus to four days – driven by the Otago Regional Council’s Leith Flood Protection Scheme.

Instead of digging up and replacing an ageing Dunedin City Council sewerage pipe that goes under the Water of the Leith just below the ITS Building, Interflow New Zealand inserted a plastic liner inside it that will give the pipe another 50 years or more of life and minimise the risks of damage during Leith flood protection works.

The 55-metre long existing earthenware pipe has a 450mm diameter and is at least five metres underground – that is how deep the manholes are on both sides of the Leith.

But no digging was needed. The plastic liner was installed by a machine placed in the bottom of one of the manholes.

The machine initially wound a smaller diameter plastic pipe, sending it corkscrewing through the existing earthenware pipe for its full length, up to the next manhole.

Then once the plastic liner reached its destination, the machine pulled a wire that let the liner expand to the full diameter of the existing pipe. 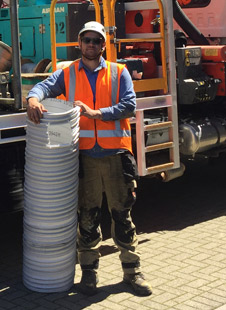 Plastic fantastic … An Interflow construction manager with a sample of the corrugated plastic pipe.

To ensure staff were safe, a generator was running a fan at the manhole on the southern side of the Leith, to draw fresh air into the manhole and to extract any gases and low-oxygen air.

Once the plastic liner was installed, a robot with a cutter attachment went inside to the spots where lateral pipes join the original pipe and cut the plastic away to restore the connections.

Then, another robot with a camera travelled the length of the new plastic pipe to record its condition and confirm installation was satisfactory.
The work started on Wednesday last week and finished during the weekend.

Interflow was back in Dunedin after previously doing similar work in the city some years ago. The company is based in New Zealand and Australia. It started in 1936 in Australia, where it installed many of the original sewers and water supply pipelines for regional towns.

Interflow has been contracted by the Dunedin City Council, in collaboration with the Otago Regional Council as part of the regional council’s Leith Flood Protection Scheme project.