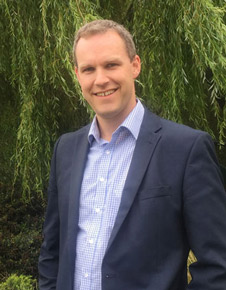 Gordon Roy feels like he is trying to solve an enormous Rubik’s Cube – and as the University’s new strategic architect, he likes that.

Piecing together solutions for wide-ranging needs across all our campuses is a daily task for him and his team – a resource planner/policy advisor, space planner and a building services engineer.

Because students have their needs, every department has its own, and spaces have to be functional and appealing, those factors “all merge into one and that’s the challenge, that’s the interesting bit”.

With his Scottish burr, Gordon’s origins are no secret. He has just moved from Edinburgh to New Zealand with Kiwi partner Jeanine McKenzie.

She is now working as a legal executive at Gallaway Cook Allen and their boys – Jonathan (9) and Charlie (7) – are going to Macandrew Bay School, just as their mother did.

The couple had always talked about moving to New Zealand and decided it was now or never. While it meant leaving one set of grandparents behind, another set has been glad to welcome them to the Edinburgh of the south.

Asking Gordon why he became an architect sparks an easy-going smile and a confession: “I got led down this path not knowing any better.”

He had always liked art and making things with his hands and as a school pupil saw architecture as a “mixture of art and science crashing together”.

However, it was such a long, intense course that involved so many all-nighters studying or finishing projects he found himself wondering at times “how did I sign up for this?”

Now, he is a senior architect with 14 years’ experience who has just finished successfully running a multi-discipline design studio in Edinburgh for the past decade – as associate director at Space Solutions.

Although Gordon had studied art history during his University years, in the workplace he naturally gravitated away from the more conceptual aspect of architecture towards the financial, contractual and project management side of the discipline.

"I’m quite analytical, I like working with people and communicating with them, I suppose I’ve got a streak of diplomacy in me."

“I’m quite analytical, I like working with people and communicating with them, I suppose I’ve got a streak of diplomacy in me.

“You need to find something that works for the clients, stakeholders, the design team and contractor. You’ve got to try to make it work as best you can,” Gordon says.

“It’s not about what I think is right or wrong, it’s about being as objective as you can to try and find the ideal solution.

“Not everybody is necessarily going to get everything they want all the time. I try to look for the positives and what they can get out of it – a bit for everyone.”

Sometimes the process also involves helping people realise what they want might not be what they actually need, he says.

From the ground up

Gordon feels he gained an invaluable grounding in the construction industry while working for Burnett Pollock Associates in Edinburgh immediately after graduating – he renovated a colleague’s flat in Edinburgh by doing everything himself, from the plumbing and electrical work to the traditional building work and joinery.

“It gives you a good appreciation of the difficulties the trades face, which has helped a lot over the years in designing something that can be built.”

Gordon went on to work for the City of Edinburgh Council, project managing the redevelopment of kitchens and bathrooms in its tenanted properties, which the council had budgeted $16 million for annually.

After two years, he moved to Space Solutions, where the business side of the operation quickly caught his interest and he rose rapidly to head the design team and became associate director, managing a team of 15 people.

He was also responsible for the Edinburgh office’s profit and loss, and kept running his own projects.

The company has a relatively rare skill set – it does everything from architecture, interior design, space planning, and organising furniture, fittings and equipment, to property rationalisation, construction and commercial relocations.

Gordon’s projects included two years as key account manager for Heriot Watt University as it changed the way it delivered teaching, which affected not only teaching and learning spaces, but laboratories and offices as well.

He was also involved in office fit-outs at the University of Stirling, Edinburgh Napier University and Edinburgh College.

Gordon was key account manager for the Scottish Government Estate as well, which included managing projects worth up to $10 million.

At home, he was still making and building things with his hands, while also road cycling and gardening – and he is not afraid of dabbling in the murky world of home-brew.

When the family decided to relocate to New Zealand, he spotted the University of Otago’s ad for a strategic architect and thought: “That’s me – in terms of what I’m looking for – a bit of people management, budget control, understanding political sensitivities and helping realise change in the built environment.”

"Property is the second biggest expense on the balance sheet after people and we need to make best use of it."

Now, he is several weeks into the job and can see many similarities with the direction other universities are taking – investing more to maintain ageing facilities, trying to find space for people to use while building work is underway and tightening the focus on maximising the use of space.

“Property is the second biggest expense on the balance sheet after people and we need to make best use of it.

“Rationalisation and more efficient use of space has a massive positive financial impact and the ability to create great space for learning and working.

“I’ve seen it in the UK and the positive impact it can have on people and organisations and there is no reason it cannot work here,” Gordon says.