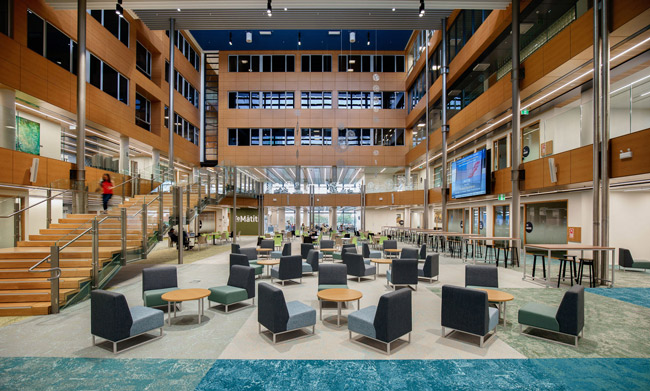 The new atrium at the Otago Business School, looking south to the Te Mātiti café. The redeveloped building is a finalist in the Property Council of New Zealand Awards.

The judges have been and the waiting has begun – the Otago Business School has made the long-list finals of the Property Council of New Zealand Awards, in the Education Facilities category.

That is the largest section in the awards this year, and Campus Development Division Director David Perry says making the long-list is great recognition for the project and the campus, which can only help enhance the University’s reputation.

Two judges visited recently to find out first-hand about the challenges involved in design, construction, and innovation at the Otago Business School, on the corner of Union Street East and Clyde Street.

The $18.5 million redevelopment over three levels aimed to strengthen the Business School’s position as a leading educator into the future, while also helping to attract more students and retain staff in a highly competitive global market.

Removing the atrium’s glazed roof and replacing it with a weatherproof roof involved working up to 20 metres above the ground floor. So the new roof – stepped over three storeys between the building’s four towers – was designed to be quickly and easily installed in sections.

Only one crane in Dunedin was capable of lifting them into place, and completed the assembly in less than a week. (Watch some drone footage).

A visually striking full birdcage scaffolding was erected in the atrium for access to the underside of the new roof, and doubled as fall protection during both demolition and construction, Mr Perry says. 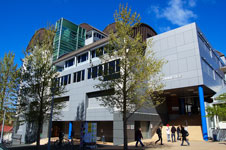 The former stairs up to the entry of the building, then known as the Commerce Building.

Noise had to be kept to a minimum during the year-long project – started in October 2016 – because the surrounding floors were occupied.

So, instead of cutting the major concrete stair and landing at the Union Street East entrance into sections and craning them out, the project used one of the first new-generation remote-controlled demolition machines, a Brokk 160 that Dunedin’s Accurate Cutting had imported, Mr Perry says.

The electric, lightweight machine can work hard – over 406 joules at the tip. While being electric made it quieter, the machine was also operated at night to minimise disruption. 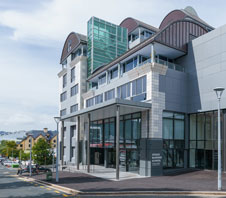 The atrium’s existing grey aluminium composite Alucobond interior cladding was removed in large sections to produce a faster and quieter result. Those façades are now covered in timber panel to the ceiling.

To maximise energy-efficiency, the atrium windows open to provide natural ventilation whenever conditions allow, using controllers imported from Europe. They were the only option identified that could let the campus-wide Building Management System know exactly how much the windows are open at any time.

For hot water heating, the building has been connected to an existing wood-fired boiler in the neighbouring Goddard building to take advantage of that low-carbon heating plant. The Otago Business School used to be powered only by electricity, Mr Perry says.

Designing the heating for the open areas was difficult because the atrium ground floor had to be free of radiators so it could cater for many uses, and space between the ceiling and roof was limited.

So, ceiling-mounted radiant panels – that use hot water – were imported from the United Kingdom, Mr Perry says. 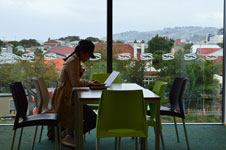 Study with a view … a student in the mezzanine Quiet Area with views over the Water of Leith and city to the south – through glass with etchings designed by Ngāi Tahu artist Ross Hemera, inspired by Māori rock, and reflect migration and settlement.

The project’s end result is drawing more people into the building, to:

Giving the 1991 building a sense of place by creating visible connections to the campus and surrounding community included installing huge new windows around the entrance, stretching from the ground floor to the mezzanine ceiling.

New pop-out windows in the café and the Quiet Zone on the mezzanine above it look over the Water of Leith and the city to the south, Mr Perry says.

The redevelopment project provided an opportunity to roll out the University’s Future State Network to the building – it was the first on campus to have all its hardware and wiring replaced.

While the building already had access to Ultrafast Broadband (a gigabit a second), wireless coverage has expanded and accessing both the wired and wireless networks is easier because devices no longer have to be registered.

The building now includes innovative refuges for people with disabilities – impermeable to smoke, they can withstand heat of about 200 degrees Celsius and have Talkaphone speaker panels connected directly to Campus Watch so people can discuss the type of help they need, Mr Perry says.

The five refuges are believed to be the most comprehensive and detailed in the country, and are documented in new University guidelines that now apply to its entire property portfolio.

In the atrium, smoke extractor fans on the ceiling were removed in favour of 110 metres of smoke curtains around the atrium’s perimeter. The curtains roll from ceiling to floor in 30 seconds, enclosing the atrium.

Anyone caught on the wrong side can escape through two curtains on opposite side of the atrium – pushing a button raises that curtain for 20 seconds. Signs on the other curtains point to the escape routes.

Smoke curtains not only need very minimal maintenance, they are hidden because they roll up into the ceiling.

To protect people behind the windows that face into the atrium, a new system drenches them with water in a fire.

So the building’s occupants can escape a fire as easily as possible, the project extended and reconfiguring four sets of stairs to lead directly outside.

Overall, the project delivered open spaces that can cater for a variety of teaching and learning strategies, provide easy access to resources and opportunities for collaboration, and can evolve as educational practices evolve.

That involved reconfiguring teaching spaces so they can be easily adapted to various teaching methods, adding furniture that is mobile or light enough to move and stack, building collaborative study areas and providing space for informal information-sharing, Mr Perry says.

The awards will be announced on Friday 15 June in Auckland.