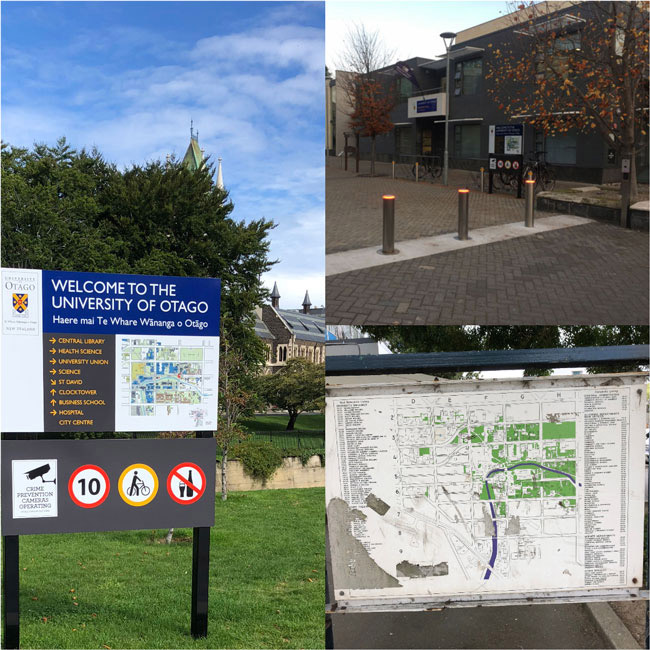 New ways people are already finding their way around the Dunedin campus … (clockwise from left) signs showing maps and directions while advising CCTV is operating, the speed limit, the alcohol ban and asking people to dismount from their bikes; bollards in St David Street with a call box – in front of the tree – for drivers to request access; and one of only three former maps on campus.

Creating the best experience possible for students and staff on the Dunedin campus has included lowering the speed limit, helping to ensure unauthorised vehicles stay away, and erecting more way-finding signs.

Initiatives so far have included lowering the speed limit around the entire campus from 15km/h to 10km/h – for vehicles, cyclists and skateboarders.

Bollards have also been installed at St David Street, near the Campus Watch offices, to prevent unauthorised vehicles getting on to the central campus. And, more bollards in other areas to try to funnel traffic through one point.

Cycle paths have been marked with images painted on the ground of a bike and an arrow-shaped chevron, while signs now remind cyclists to dismount on the central campus and they are being asked to respect that.

Cyclists cannot ride through the central four blocks on campus – between Cumberland Street, Albany, Leith and St David Streets – they can just go to the nearest bike rack.

All the University’s building projects now include facilities such as cycle racks, showers and storage lockers for people who walk or cycle to work.

Cyclists can request space in a lockable bike cage from Property Services and the University is going to create an on-line map of all bike racks and cages.

People also now know when they are arriving on campus, because 12 signs with maps and other information were erected at entrances and key points before this year’s students arrived.

Until then, the campus had three large complex maps that had deteriorated over time.

The new maps have been simplified – for the central campus, health science precinct, and eastern campus.

Each map has building names and directional arrows, while a small map of the entire campus provides the larger context

Mr MacKay says more way-finding work getting underway will make navigating the Dunedin campus even easier, by creating an agreed set of guidelines and policies that include a consistent design for digital and static signs.

"We want to provide the best experience we can for all users – so interacting with our campus is as enjoyable and simple as possible – while celebrating our historical precincts and cultural heritage."

The aim is to provide the right navigational support in the right areas – both outside on campus and inside buildings – while embracing people’s physical, cultural and language needs, and linking into the planned student app.

The project includes developing historical and cultural trails that share and celebrate the University’s heritage as well.

Mr MacKay heads the Project Steering Committee for the Campus Wayfinding Project and says it is important for a large, complex campus that is home to a highly diverse mix of facilities which support the learning experience of students at Otago.

The University is also historically rich, and culturally and physically diverse.

"We want to provide the best experience we can for all users – so interacting with our campus is as enjoyable and simple as possible – while celebrating our historical precincts and cultural heritage," Mr MacKay says.

Health and Safety Advisor Nevan Trotter says if pedestrians ever get hit or have a near miss with motorists, cyclists or skateboarders on campus, they should record that in Vault, the University's online Health and Safety reporting tool and management system.