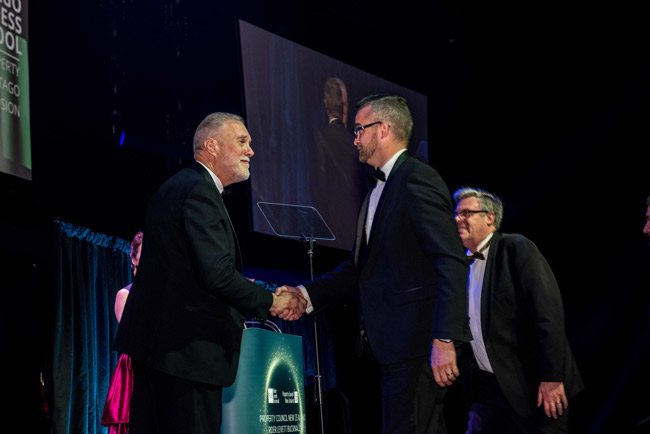 The incredible redevelopment that transformed Otago’s Business School building has won an Excellence Award in the Education category of the New Zealand Property Council Awards held on Friday night.

The awards are the premier national property industry awards, and the Otago Business School redevelopment was up against some very strong competition from throughout New Zealand.

The $18.5 million redevelopment over three levels, which was officially opened late last year, was designed by Dunedin’s Mason & Wales Architects.

It took a cold, wet, slippery, partially-roofed plaza, and turned it into a classy, naturally lit hub that draws students and staff alike into a welcoming study and social space.

"The award reflects a lot of hard work done by the partnership between our team and the Otago Business School, and collaboration with the wider University community to help ensure the building meets everyone’s needs."

The original main entrance and atrium were demolished and remodelled and extra attention was paid to providing state-of-the art facilities for people with disabilities in the case of a fire emergency. Fire safety was also significantly improved across the development which also addressed seismic strengthening issues.

The redevelopment includes a new café and events space Te Wao Nui, which not only draws people inside, but also gives the building stronger connections to the campus, the environment, the community, and local iwi.

The Education category of the awards was the largest – with 12 finalists. In May two judges visited the campus to see the project first-hand, and on Friday evening at a ceremony in Auckland the Otago Business School redevelopment received one of three Excellence Awards in this category, with the ‘Best in Category’ going to Auckland’s King’s School Centennial Building.

The last time the University of Otago won an Excellence Award from the Property Council was for the ISB about 15 years ago.

The judges told the Otago Bulletin Board they were impressed with the high quality vision for the School of Business building redevelopment.

“The addition was well designed, using long lasting materials and built to a very high standard. This has added significant value and amenity to the adjoining buildings as well as creating an engaging and attractive entrance onto Union Street. The project has created a light and welcoming modern learning environment as well as a much needed heart and social hub for the Otago Business School.” 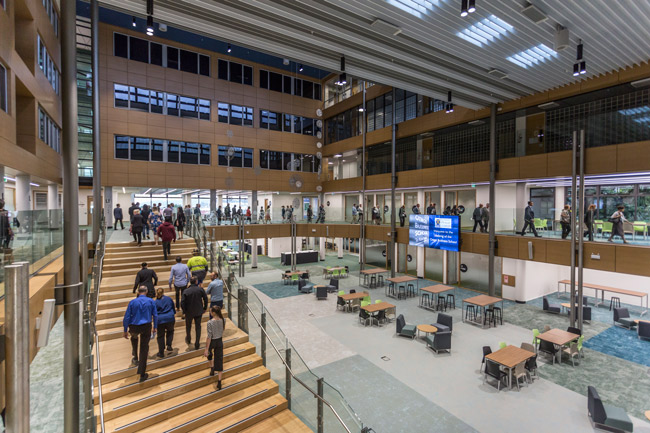 The award-winning redevelopment of the Otago Business School building.

Campus Development Division Director David Perry says his team is really proud of the transformation of the building, and receiving endorsement from the industry in the form of a national award is wonderful.

“The award reflects a lot of hard work done by the partnership between our team and the Otago Business School, and collaboration with the wider University community to help ensure the building meets everyone’s needs.

“I think that it is an excellent redevelopment that has transformed a part of the building that people avoided because it was unsafe when it rained and was cold and wet in winter. Now it is one of the most sought after spots on campus – warm, inviting, with great views over the Leith flowing through the campus which you can watch as you sip on great coffee from the new café.”

"Now it is one of the most sought after spots on campus – warm, inviting, with great views over the Leith flowing through the campus which you can watch as you sip on great coffee from the new café."

He acknowledges the work of the design team led by Mason and Wales, the contractor Naylor Love, the engineers Beca, the quantity surveyors Flanders Marlow Ltd, and the Ngai Tahu artists Simon Kaan and Ross Hemera.

The University’s Chief Operating Officer Stephen Willis says the award is a major run on the Operations Group’s audacious goal of having every division in the Group being recognised as an industry leader in Australasia and among the University’s Matariki partner universities by 2020.

“It should inspire others in my team to enter more awards, knowing it is possible to get a result.”

The Dean of the Otago Business School Professor Robin Gauld says the award validates the vision and work of all of those involved in the project.

“Those of us working in this building pinch ourselves every day at the wonderful new interior spaces. Students and staff from around the campus love meeting and working in it – it’s dramatic, peaceful and focuses the mind. We are also thrilled at the outcome of a design partnership involving two prominent Maori artists working closely with the architects.”

Architect Andrew Kissell says his company was thrilled with the Excellence Award.

“The Otago Business School redevelopment pays respect to the original building, and has established a strong new identity for the School. It brings new life and activity to the building, creating at its core a new warm and welcoming heart and gathering place which has reinvigorated the Business School.”

While the public spaces of the building are open to all, the Property Council will next month host an update/tour of the Otago Business School redevelopment.

The event, which will take place on Wednesday 18 July 2018, from 5:15pm, will include presentations from the architects and David Perry.

Projects were judged on economic and financial factors, project vision and innovation (including degree of difficulty), design and construction, owner and user satisfaction, and sustainability and efficiency of operation.

A total of 97 nominations were received this year, covering a range of categories such as office, retail and education, arts, green and tourism projects through to public buildings, urban land, and industrial and heritage developments. The judging process spanned more than three months.

The supreme winner was Waikoukou, the former Dominion Post building. Currently home to Transpower's Wellington office, it also took out Best in Category for the RCP Commercial Office Property Award.

Other winners of Excellence Awards in the Education category were Te Auaha NZ Institute of Creativity (The Cuba Dixon Redevelopment) in Wellington and Queenstown’s Wakatipu High School.