Director of Property Services Barry MacKay today closes the door on 17-and-a-half years at Otago – before heading to Perth to take up a new role as Director of Property and Commercial Services at Murdoch University. As he told the Otago Bulletin Board, he and his wife Deidre were ready for a “sea change” – they just didn’t think they would travel so far to find the sea. 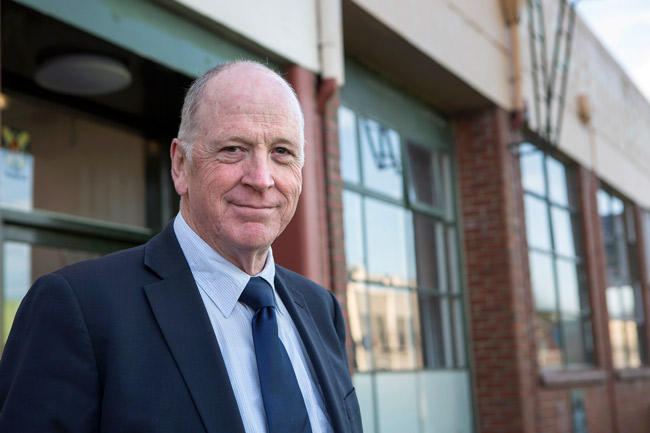 Barry MacKay has had a varied career, which has seen him move from carpenter, to clerk of works, to project manager, to facilities manager then to Otago to become Director of Property Services. It has cost him half of one of his fingers (a jointer incident at age 19), but not his sense of humour.

Mr MacKay took up his role at Otago in late 2001. On the 22 August he will relocate to Perth to take up a new, but similar role at Murdoch University.

He says he is sad to leave, but ready to move on – and is relishing the idea of the fresh set of challenges that a different university will provide.

“Murdoch is a rather different university to Otago,” he says. “It’s quite a new university compared to Otago, having been opened in 1975. Our campus is like an English parkland, Murdoch has a really nice bushland campus. One of the challenges will be preserving the bushland. The university also has a strong connection to the people of the land.”

"The opportunity came at a perfect time, and will round off my career."

He was shoulder-tapped for the new role, and laughs because when attending his nephew’s wedding in Perth last November he insisted to his extended family that he would “never” move to Perth. Just four months later he accepted the job at Murdoch.

“The opportunity came at a perfect time, and will round off my career.”

He says he and his wife Deidre were ready for a change but that he was picturing something more like heading to Karitane to make handmade furniture.

“We were ready for a sea change – we just didn’t think we would travel so far to find the sea,” he says. “It’s quite an expedition for us, but it’s something we are really looking forward to. Karitane will still be there when we come back.”

When announcing his resignation in May he told his staff he was “proud of the contribution that we have collectively made to the ongoing growth and success of the University.”

This has ranged from the recent success of the new landscaping project which has transformed the Dunedin campus, to getting the new Dental Building project off the ground, to the work of staff to support the Christchurch campus following both the September 2010 and February 2011 earthquakes.

“I’m very proud of the really good people we have in Property Services, who try to do their best for the place.”

He is also really proud of the work his team, together with Campus Watch, has done to clean up North Dunedin.

“Our Grounds Team used to refer to Castle Street north of Dundas Street as ‘Kosovo’,” he says. “Campus Watch have done a great job getting rid of the couch fires, and we have worked closely with the DCC on the cleaning contract. We put extra skips out at the end of each month and at the end of each semester. Each year we take away enough rubbish to full the Union Hall twice. While rubbish reduction is another challenge for this University and people in general, I’m proud of the difference we have made in this area.”

As Director of Property Services Mr MacKay has been responsible for the delivery of the planning, development, operation, maintenance of all University-owned or leased buildings, grounds and utilities, and the provision of all associated custodial services.

"I have immensely enjoyed and appreciated the support everyone has given me."

As with every job description, when the generic gives way to the specific, there is plenty to amuse. The pumpkin incident for example:

“In 2006, I think, a number of spray painted pumpkins started appearing in strange places around the University including one on the lightning rod on the Clocktower.

“Property Services got in a crane and removed it, and in doing so we also found the climbing gear of the perpetrators.”

Mr MacKay could have taken punitive action – but chose to step lightly.

“I put out a note saying I had the climbing gear, and if they wanted to retrieve it they could. I said I wasn’t going to dob them into the Proctor, but as a climber I wanted to congratulate them on a very technical climb.

“A few days later two individuals sheepishly turned up in my office and collected their climbing gear.”

And did they do it again?

“The pair graduated at the end of that year – and after that the University no longer had a pumpkin problem,” he laughs.

As Mr MacKay himself prepared to leave Otago, he told the Otago Bulletin Board that he would “truly miss” his colleagues, many of whom he has worked with for many years.

“I have worked with Margaret [Henderson, his Executive Assistant] for 14 years and many others for varying lengths of time. I have immensely enjoyed and appreciated the support everyone has given me.”