Charging ahead with fast-chargers 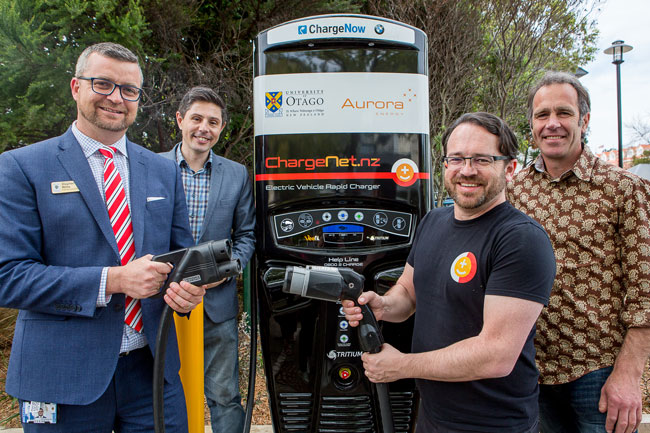 A second rapid charger for electric vehicles (EVs) in Dunedin is operating now at Otago – as the University continues to demonstrate its commitment to sustainability.

After the charger started operating on 26 September, it charged vehicles 128 times in about 20 days, with “an amazing” 11 users on the busiest day on Sunday 14 October, ChargeNet Chief Operating Officer Nick Smith says.

He is elated the University created a solution to his almost three-year long hunt for a Dunedin charging site. The site, on the corner of St David and Cumberland Streets, was officially launched on Friday.

The pay-for-use charging station is just off the State Highway One south, in an open space and is easy to get to and find.

"Everybody’s actions, no matter how small, play a part in helping us achieve larger sustainability goals – for the University, our city and beyond."

Dunedin has a high proportion of EV owners per head of population and a lot of enthusiastic people in its EV community. They were told the charger had opened via social media, ChargeNet’s app and map, and the electric vehicle charging station map PlugShare.

Now, the Kiwi-owned company also has another rapid charging station under construction in Mosgiel – in the New World supermarket carpark in Hartstonge Avenue – and is eyeing up a potential site in the Pak ‘n Save car park in South Dunedin, Mr Smith says.

Rapid chargers use direct current (DC) and can charge a standard family car in 15 to 30 minutes but are relatively expensive to install, while charging a vehicle at home normally involves using alternating current (AC) and takes six to eight hours.

Dunedin’s first fast-charger – supplied by local electricity network Aurora Energy – was installed in Filleul Street in 2016 and was the first in the South Island at the time.

Aurora Energy chief executive officer, Richard Fletcher, says: “We are delighted to support expansion of public fast charging for EVs. As a hub for innovation, it is fitting for the University to be leading the charge for emission-free transport and hosting the new EV charger.

“Thanks to our partner ChargeNet for their continuing work on expanding the EV charge network in Dunedin and Otago.”

University of Otago Chief Operating Officer Stephen Willis says Otago is pleased to provide a location for the charger to show the University’s commitment to sustainability is real and measurable.

“Everybody’s actions, no matter how small, play a part in helping us achieve larger sustainability goals – for the University, our city and beyond.”

The University aims to be a leader in sustainability – to become a national and international centre of excellence for sustainability practice and research.