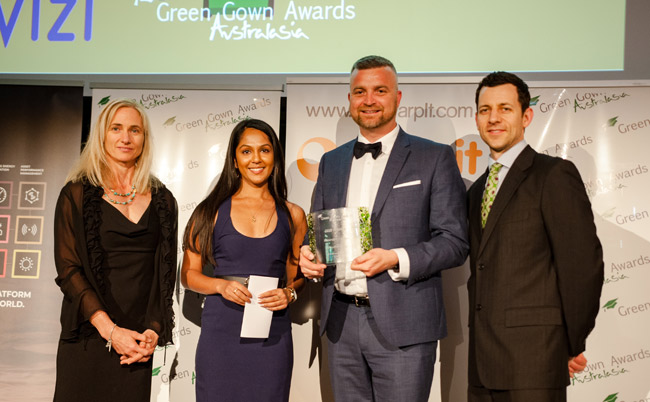 The University of Otago has won a prestigious Australasian sustainability award for an initiative that aims to shrink the University’s carbon footprint by a third by 2020 and propel the campus more than halfway towards being zero carbon.

The awards aim to inspire, promote and support change towards best practice sustainability in the operations, curriculum and research of the tertiary education sector.

Chief Operating Officer Stephen Willis, who was in Adelaide to receive the award, says being chosen as a winner in the only awards dedicated to recognising sustainability excellence in the tertiary education sector in Australasia was incredibly humbling and shows Otago is on the right track.

He says the University’s entry was about working with its main energy supplier, Pioneer Energy, to stop firing its boiler with coal and start using local wood chips, an initiative that is happening gradually, and will be complete by 2020.

This initiative has already seen a drop of 20 per cent in the University’s largest emission source in only five months.

As a finalist, the University was asked to produce a video about the initiative it entered.

She believes the award demonstrates the integrity of the University’s commitment and will encourage more people to get involved.

The manager of the University’s Office of Sustainability, Dr Hilary Phipps, says she feels the change is the most significant short-term action the University can take to show climate leadership, achieve a rapid reduction in its carbon footprint, and show the University is doing much more than just talking about sustainability.

The University of Otago Council approved the framework that made approaching Pioneer Energy possible – the Sustainability Strategic Framework: 2017–2021 launched in May 2017.

A large number of people contributed to the University achieving this award, including past and current members of the Vice-Chancellor’s Environmental Sustainability Advisory Committee, members of an earlier working party, and staff and students who provided feedback during the various stages of the framework’s development.

Dr Phipps adds that the University will continue with sustainability initiatives - forging ahead to achieve the priority actions underpinning its strategic framework and creating more opportunities for people to get involved in sustainability action.