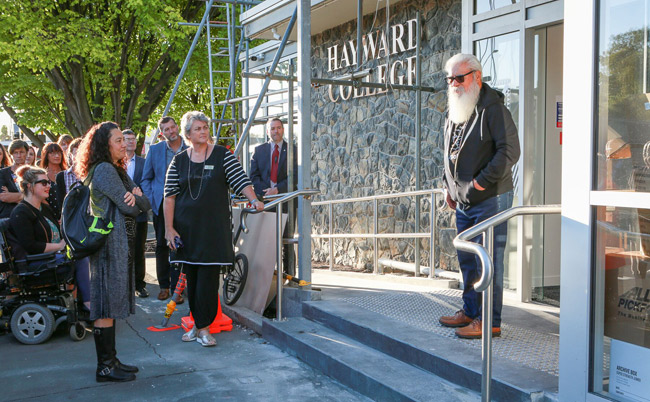 Strains of Te Aroha echoed though the refurbished halls of Hayward College as the new-look building was blessed on Friday morning.

Kaitohutohu Hata Temo led about 40 people through the building, which then welcomed almost 180 students during the weekend.

Contractors took just 14 weeks to strip back and refurbish the college.

“We wouldn’t have started it if we didn’t think we could finish it in time because that would have been an absolute disaster,” Logic Group Director Sam Cadden says.

The work started after student residents left last year and the extensive demolition work was finished before Christmas, which involved removing 822 tonnes of demolition materials, 540 tonnes of which was recycled – scrap metal, timber, and concrete and bricks that are crushed to help form farm roads.

"I think it looks fabulous. It looks very modern and I’m really looking forward to working in this environment with staff and students ... I want to thank every single person who worked on this site. They did it for us."

All the bedrooms in the main building have been rebuilt, along with the shared bathrooms and kitchens on each floor (the kitchens contain only a toaster, fridge, bench and sink because food is supplied in the dining room).

Each floor also has an accessible bedroom with swipe card access, an ensuite, and strobe lighting to signal an emergency to anyone who is hearing impaired. The kitchens on each floor have a wheelchair-accessible bench, at least one shared bathroom on each floor is accessible, and a ramp has been added to the college’s main entrance.

To get the work done to the tight time-frame, the college kitchen remained open in order to feed the contractors: up to 150 people were working on site a day at peak times, and two different shifts worked from 6am to 10pm seven days a week – apart from Christmas Day, Boxing Day and New Year’s Day, Mr Perry says.

Head of College Pauline Donovan says after the intense construction time, seeing the end in sight was a little emotional.

“I think it looks fabulous. It looks very modern and I’m really looking forward to working in this environment with staff and students.

“This is the end of a very long journey for Hayward College and it’s a new beginning for us.

“I want to thank every single person who worked on this site. They did it for us.”

Hayward College was developed from the Queen Mary Maternity Hospital in 1992.